Mali in West Africa, may not come across to many people as a tourist destination, but the country has recorded over 20 percent rise in number of tourists visiting the country in the last three years after it adopted a concerted effort to merge development of tourism sector and peace pursuit. 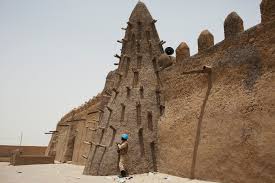 According to the United Conference on Trade and Development (UNCTAD), in 2017, Mali welcomed about 193,000 foreign tourists, against 159,000 in 2015, despite the insecurity suffered by the country in recent years.

Linking tourism and peace was one of the objectives of the Africa Economic Development Report 2017. This shows that peace is a natural engine of tourism and that tourism, in turn, is a factor in promoting peace.

This positive reciprocal relationship is created when tourism makes the link between different cultures. It then boosts partnerships and gives rise to new economic opportunities.

The Dogon people of Mali are an indigenous group that remains faithful to its culture and ancient traditions.

The Malian tourism sector contributed around nine percent of gross domestic product (GDP) and represents around six percent of total employment in 2017 (World Travel and Tourism Council). It is thus reasonable to think that in Mali too, tourism can make a valuable contribution to peace.

With its expertise, UNCTAD supports Mali in its efforts to develop tourism. In particular, it proposes tools for measuring regional tourism value chains in order to develop an evidence-based service policy.

On 29 and 30 July 2019, Mali organized a seminar on measuring and exploiting the potential of its value chain in tourism. It will be followed by further study. Objective: to quantify the interactions and losses at work in the tourism sector.

At the opening of this seminar, Nina WaletIntallou, Minister of Craft and Tourism of Mali said: “Understanding the structure of value chains in the tourism sector is an important prerequisite for the development of tourism policies. development of this same sector. ”

The study will provide insights on how regional value chains can be strengthened.

Regional links are important as about 30 percent of international tourists to Mali are from Africa.

This number is likely to increase with growth in disposable incomes in the region, better regional integration, stronger transport infrastructure, and the emergence of a more stable and sustainable peace.

A unique form of collaboration demonstrates UNCTAD’s commitment to its partnership with Mali. As the current situation does not allow the participation of international experts, UNCTAD and Mali felt that the best way forward was to organize a seminar with national experts.

Thanks to communication technologies, UNCTAD was able to support the seminar at a distance. Although this process is not ideal, it is a valuable alternative, in particular because both partners trust each other.

More than 30 stakeholders in the tourism value chain in Mali participated in this seminar, including the Ministry of Crafts and Tourism, the Regional Directorates of Tourism and Hospitality, the Tourism Promotion Agency, the Statistical Office, representatives of the Hotel Association, publishers of tour guides, tour operators, craft associations and industry workers, among others.

This wide participation is a guarantee of success for both the seminar and the project. Indeed, the measure will only be precise and useful for the policies if the stakeholders are fully involved, adhere to the objectives of the project and see its intrinsic value.

The seminar is a partnership between the Ministry of Crafts and Tourism and UNCTAD and is part of UNCTAD’s project on trade in services in Africa.

In this framework, UNCTAD and the Economic Commission for Africa are helping six African countries to measure the contribution of services to regional value chains and to improve evidence-based services policy.