U.S. Treasury Secretary Steven Mnuchin said on Wednesday that he and other U.S. officials will travel to Beijing next week for trade talks, aiming to clinch a deal to avert a March 2 increase in U.S. tariffs on Chinese goods. 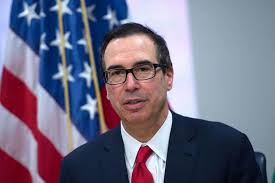 Mnuchin said in an interview with CNBC that the talks he and U.S. Trade Representative Robert Lighthizer led in Washington last week with Chinese Vice Premier Liu He were “very productive.”
“Ambassador Lighthizer and myself and a large team are on our way to Beijing next week. We are committed to continue these talks,” Mnuchin said.
“We’re putting in an enormous amount of effort to try to hit this deadline and get a deal. So that’s our objective.”
U.S. President Donald Trump said in his State of the Union address on Tuesday that any new trade deal with China “must include real, structural change to end unfair trade practices, reduce our chronic trade deficit and protect American jobs.”
Trump has vowed to increase U.S. tariffs on $200 billion worth of Chinese imports to 25 percent from 10 percent currently if the two sides cannot reach a deal by 12:01 a.m. (0501 GMT) on March 2.
Bilateral talks have centered on addressing U.S. demands for deep structural changes to China’s economic and trade policies, including new protections for U.S. intellectual property, ending forced technology transfers, reining in China’s subsidies for state industries and increasing Chinese purchases of U.S. farm, energy and manufactured products.
“We are also very focused on free and fair trade for U.S. companies to have access there and to having a more level playing field which will bring down the trade deficit,” Mnuchin said.

NSE: Trading maintains bearish trend on shares, index down by 0.07%