The S&P 500 moved closer to its all-time high on Wednesday, while technology stocks nudged the Nasdaq to a record level, as investors took heart from a largely upbeat earnings season. 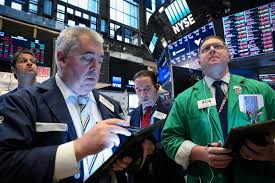 The S&P 500 is just 6 points shy of its intra-day record high of 2,940.91 hit in late September. The index has rallied 17% this year, supported by a dovish Federal Reserve, hopes of a U.S.-China trade resolution and a largely upbeat earnings season.
“For the most part, stocks are fully priced in and markets are having trouble finding reasons to go to even higher levels,” said Rick Meckler, partner at Cherry Lane Investments in New Vernon, New Jersey.
Boeing Co gained 0.6% after the planemaker scrapped its 2019 outlook and reported quarterly revenue below estimates due to grounding of its 737 MAX jets. Its shares have lost 11% since the deadly Ethiopian crash in early March.
Caterpillar Inc fell 2.4% as rising costs hit margins in its construction equipment business and the company reported tepid sales in the Asia Pacific region.
Profits of S&P 500 companies are expected to decline 1.1% for the first quarter, according to Refinitv data. However, the estimates have improved since the start of April, with 77.5% of the 129 companies that have reported so far surpassing earnings estimates.
At 11:29 a.m. ET, the Dow Jones Industrial Average was down 10.90 points, or 0.04%, at 26,645.49. The S&P 500 was up 0.44 points, or 0.01%, at 2,934.12 and the Nasdaq Composite was up 10.45 points, or 0.13%, at 8,131.27.
“We have some big earnings coming up like Amazon that could impact markets. But the next big news that the markets could face is the China trade agreement, if we are going to get one,” said Meckler.
U.S. President Donald Trump sounded upbeat about the ongoing U.S.-China trade talks as the two sides worked on hammering out a final deal.
Microsoft Corp and Facebook Inc, set to report after the closing bell on Wednesday, were down slightly.
Chip stocks rose as much as 1.9% to a record high after shares of Texas Instruments clawed back losses.
EBay Inc shares jumped 4.9% after the company raised its full-year sales and profit forecasts.
AT&T Inc shares declined 4% after the second-largest U.S. wireless carrier reported quarterly revenue below Wall Street estimates.
Anadarko Petroleum Corp shares jumped 12.1%, providing the biggest boost to the S&P 500, after Occidental Petroleum Corp sought to scuttle Chevron Corp’s takeover of the company with a $57 billion bid. Occidental’s shares fell 3%.