Economic policies are deliberate master action plans covering a span of time carved out on how to grow, develop and operate a sector. Usually, they form the blueprint and are catalysts for developing any sector. Unfortunately, Nigeria’s aviation lacks policies and has remained abysmally low in its contribution to the gross national product. In this report, SAMSON EHENIM chronicles cries of experts and investors on the need for the country to develop coded blueprint for developing its aviation industry.

Running an airline in Nigeria is a hard business. Indeed, most businesses are not grown into successes and profits on a platter of gold, but operating in an industry without certainty, where many have failed and trying to be the mida’s touch will mean betting one’s life on it.

This is where domestic airliners in Nigeria find themselves. Their situation is worsened by myriad of economic issues, ranging from regulatory to operational and running back and forth within the two realms. The woes in Nigeria’s aviation sector are many and not new, but what will be new is any known tangible effort by the government to back the industry, which has remained critical for every economy to develop. 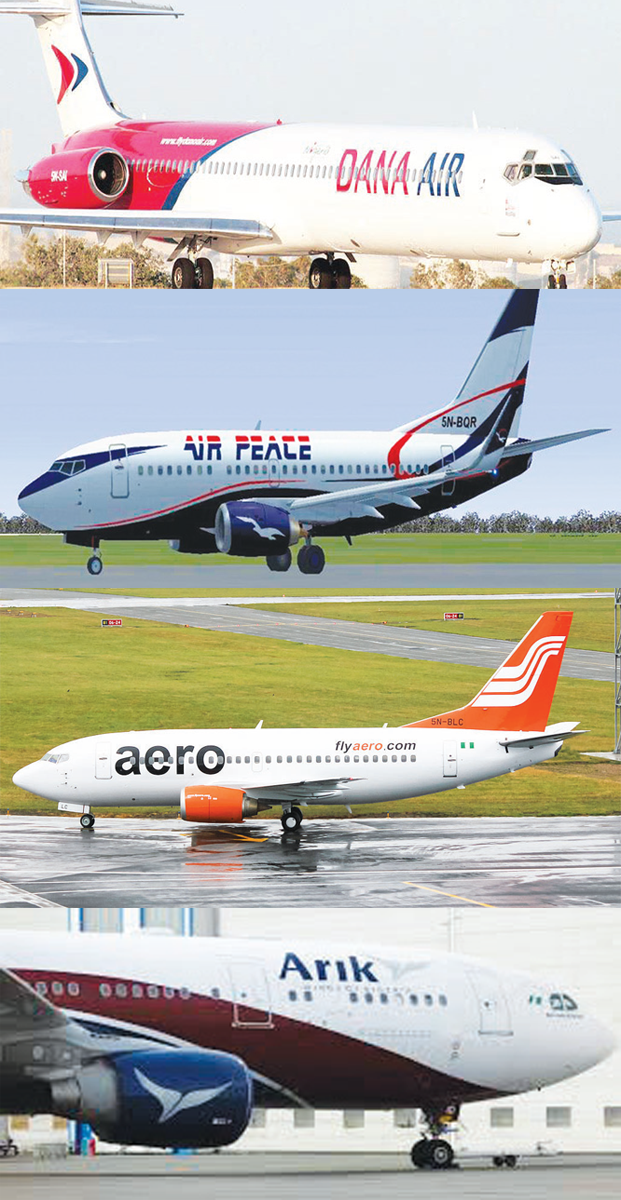 The situation has made it that only the very rich elites can enjoy air travels, a population below 2 million in a country of 200 million people. This means that just one percent of Nigerians use air transport. With a purchasing power parity of $5,680 in 2017, compared to South Africa’s $13,090 and United States of America’s  $60,200 for same year, Nigerians’ ability to enjoy air travel remains one of the lowest in the world, with airlines services not getting down to their reach any time soon. This means that domestic airlines have very limited market. It is like searching for potable water in the ocean. The market could expand astronomically if the cost of air transport, now hovering around an average of $100 (about N36,000) becomes much friendlier. But this would be taking the local airliners to the slaughter chamber, as the average air travel ticket cost in the US is $500.

Even though the total number of travellers who passed through Nigerian airports in 2017 was 9,458,521, it is a common fact that one rich traveller could have been recorded multiple times. It does not mean that 9.4 million Nigerians can afford air travels. Consequently, Nigeria’s aviation sector contributes a paltry 0.4 percent with about N119 billion in fiscal value. This is compared to 3.5 percent for South Africa and a projected 25 percent by 2020 for Ethiopia.

Contending with multiple taxation, unfair competition with foreign airlines ravaging the country’s airspace without mercy; lack of cheap funding and maintenance facilities, investors say the total lack of policy blueprint for the aviation sector is their biggest headache.

At an industry conference themed, “Boosting Aviation Investment through Policy,” in Lagos recently, aviation operators called for “consistent and codified policy framework”  to ensure that local airlines that still manage to warm the country’s airspace survive. This is also necessary to encourage new investment in the sector.

They reasoned that precise policy formulation and effective implementation of same could be the much needed impetus to awaken West Africa’s largest aviation market. Emphasis was placed against policy somersault, which was blamed for the industry’s many woes.

“A new government comes in and puts a policy that may be good for the industry, but when it leaves another comes in and changes it all. Investors want certainty. They want to know what happens in two years time, in five  and in 10 years time. Bringing in a new person should not mean the policy should change. Policies must be codified so no matter who comes in, he or she tows the path and continues instead of changing things around,” Mbanuzuo said.

In the same vein, Harold Demuren, a former director general of the Nigerian Civil Aviation Authority (NCAA), said, “The aviation sector needs positive investment driven policies to grow. Unfortunately, Nigeria’s biggest problem is that we make policies, but they somersault.”

“To grow aviation there has to be a deliberate and consistent policy geared towards ensuring that the airlines who are the primary players in the industry can actually survive. Unfortunately, most of the things we do in the industry are borne out of knee jerk reactions.

“When you put a policy framework in place, it is assumed to be proactive because you are looking at the issues and you are proffering solutions by way of articulating a chart of course that you want to chart, to say this is the part we are going to thread over a certain number of years to be able to see that we can grow a particular segment or segments of the industry and stay consistent with it,” said Iyayi, Top Brass Aviation CEO.

Multiple entry points given to foreign airlines by the Nigerian government is “disastrous and deliberate annihilation of the domestic market,” said Demuren.

Foreign airlines are said to maintain 90 percent traffic in and out of Nigeria, with no Nigerian airline having similar privileges. This signifies an anticlimax in the country’s Bilateral Air Service Agreements with other countries, where it does not have a national carrier.

Investors and experts alike want the government to review Nigeria’s BASAs. Demuren said the Nigerian government was deliberately promoting a negative balance of trade by allowing foreign carriers fly to multiple airports in Nigeria without any Nigerian airline enjoying similar privilege in the foreign airlines’ countries of origin.

“It is high time government reflected on the national aviation policy. There is no national policy plan on aviation development in Nigeria and this is not the way to handle it if we want aviation sector to grow. The essence of regulation is not only about safety. We have failed with economic regulations. This is a major weakness,” he noted, while speaking through Gabriel Olowo, president of the Aviation Roundtable at the forum.

MuneerBankole, chairman of Medview Airline, said the liquidation of Nigeria Airways put a serious stumbling block on the development of aviation in Nigeria.

“The aviation sector is critical for the development of any economy because it services all other sectors of the economy. Government must find ways to harness the sector to begin to earn meaningfully from the sector,” he said.

Aviation could be a catalyst for Africa’s economic growth and social advancement and  Nigeria can tap into this by providing more support to the growth of the increasingly important African business and general aviation industry, which are tools for economic development, according to Nick Fadugba, CEO, African Aviation Services,.

“A situation where over 90 percent of international air traffic to and from Nigeria is carried by foreign airlines, is damaging to the economy in several ways. It amounts to huge capital flight and the continued deterioration of the country’s aviation industry.  If properly harnessed, Nigeria’s aviation sector could become one of the keys to Nigeria’s future prosperity,” Fadugba said.

According to him, since Nigerian Airways was liquidated there was no airline to reciprocate on bilateral air service agreements, so foreign airlines gained a huge advantage over Nigerian airlines.

“Air Peace is launching long haul services to Dubai but they need support from government and from the flying public in Nigeria. I don’t see why Emirates coming into Nigeria from Dubai why they can’t partner with Air peace. If Air peace can partner with Emirates to Dubai it is a win-win. So Emirates shouldn’t have the lion share of the business and it is the government that can influence that,” said Fadugba, who is also president of the African Business Aviation Association (AfBAA)

Too small to go solo

Fadugba believes that no airline can succeed working alone. This therefore, calls for collaboration among Nigerian airlines and this doesn’t necessarily call for mergers and acquisition, he said.

He said, “Airlines in Nigeria must put their heads together. They have to work together in operations, training, maintenance and partner in most aspects of their businesses. The average fleet size in Nigeria is about maximum 10 aircraft and yet we are competing with British Airways that has over 400 aircraft. Delta Airlines have over 500 aircraft. Even Ethiopian Airlines has 110 aircraft. So how can small airlines compete? I am not being disrespectful, but I want to be realistic, because this industry is a cut-throat.

“If you don’t have a critical mass in terms of size, in term of good management, in terms of fleet, in terms of good network, it is very hard to succeed. So we have the market in Nigeria, we are very fortunate but the fact is that our airlines are at the moment not of the size that can compete effectively against the big airlines coming into Nigeria.”