Oil prices steadied on Monday as major producers Saudi Arabia and Russia had yet to agree on extending an output-cutting deal and U.S.-China trade tensions continued to threaten demand for crude. 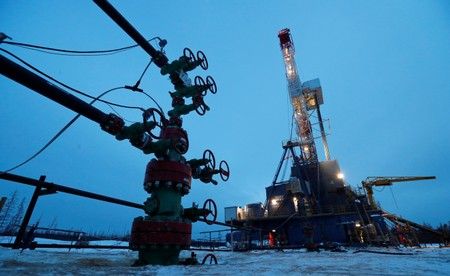 Front-month Brent crude futures were at $63.29 a barrel by 1225 GMT, unchanged from Friday’s close.
U.S. West Texas Intermediate (WTI) crude futures were at $54.26 per barrel, up 27 cents or 0.5%.
Saudi Energy Minister Khalid al-Falih said on Monday that Russia was the only oil exporter still undecided on the need to extend the output deal agreed by top producers.
The Organization of the Petroleum Exporting Countries and some non-members, including Russia, have withheld supplies since the start of the year to prop up prices.
Moscow is considering whether further cuts could allow the United States to take Russian market share and has yet to signal whether it will continue to curb its supply.
Russian Energy Minister Alexander Novak said on Monday he could not rule out a drop in oil prices to $30 per barrel if the global deal was not extended, saying there were big risks of oversupply.
Analysts also warn of risks to the global economy from the United States’ trade war with China.
Harry Tchilinguirian, global oil strategist at BNP Paribas, told the Reuters Global Oil Forum that the United States and China accounted for around three-quarters of last year’s growth in global oil demand.
“If Sino-U.S. relations do not improve, the spot price of oil, in our view, will remain depressed,” he said.
China’s crude oil imports slipped to around 40.23 million tonnes in May, from an all-time high of 43.73 million tonnes in April, customs data showed, due to a drop in Iranian imports caused by U.S. sanctions and refinery maintenance.
Barclays bank, in a note, said over the past week or so its economists had revised down their GDP growth outlook for the United States, China, India and Brazil – countries that account for more than three-quarters of their oil demand growth assumptions for this year.
“The revisions imply a 300,000 barrel per day reduction in our current global oil demand outlook of 1.3 million barrels per day year-on-year for this year,” the British bank said.

Brent oil inches up on Iran tensions and OPEC, while U.S. crude falls

Fuel energy: Gas usage will save Nigeria $10 billion in 2019