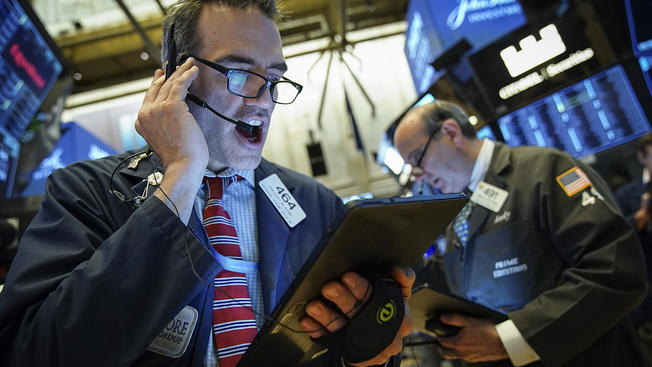 The S&P 500 gained 0.6% to break above 3,000 for the first time ever as the energy and tech sectors outperformed. The Nasdaq Composite also hit an all-time high, rising 1%. The Dow Jones Industrial Average jumped 195 points to a record, led by Chevron and American Express.
Amazon shares rose 1.2% and broke above $2,000 per share. FedEx shares climbed more than 1% after Goldman Sachs added them to their conviction buy list.
In prepared testimony to the House Financial Services Committee, Powell said business investments across the U.S. have slowed “notably” recently as uncertainties over the economic outlook linger.
“Crosscurrents have reemerged,” Powell said. “Many FOMC participants saw that the case for a somewhat more accommodative monetary policy had strengthened. Since then, based on incoming data and other developments, it appears that uncertainties around trade tensions and concerns about the strength of the global economy continue to weigh on the U.S. economic outlook.”
Gold prices jumped on the remarks, trading 0.7% higher at $1,407.21 per ounce. The 2-year Treasury rate, meanwhile, fell to 1.86%.
Powell will deliver his testimony at 10 a.m. ET and answer questions from lawmakers.
“Powell’s prepared testimony struck a decidedly dovish cord with ‘uncertainties’ over trade and global growth since the June FOMC meeting characterized as having dimmed the outlook. By way of an update, the Chair just confirmed that things have gotten worse,” said Ian Lyngen, head of U.S. rates at BMO Capital Markets.
His testimony comes after the Fed opened the door to cutting rates at its previous monetary policy meeting in June. The central bank dropped the word “patience” in its statement then.
Traders have priced in a 100% probability of a Fed rate cut in July, according to the CME Group’s FedWatch tool. A stronger-than-expected June jobs report tempered expectations for a more aggressive easing.
Powell in his testimony “fully endorsed the July rate cut and did absolutely nothing to pull the markets back from that expectation,” said Peter Boockvar, chief investment officer at Bleakley Advisory Group. “There was little in the statement to imply what this means past the July meeting, but we can infer that any further softening in the data past July will likely mean more action from the Fed at subsequent meetings.”