Trafigura, Mercuria and Vitol, three of the world’s biggest oil and gas trading companies are reportedly ramping up investments in energy infrastructure and signing new supply deals in the United States that analysts say are likely to ensure the flow of shale oil and gas for a long time to come, according to a Bloomberg report.

The traders are believe to see long-term opportunities in an industry that has already upended global energy flows, particularly since the U.S. lifted a four-decade old ban on exports at the end of 2015.

“Shale, barring a major environmental issue, has become the new reality,” said Jean-Francois Lambert, a former commodity trade finance banker with HSBC Holdings Plc and now an independent consultant. “It brings more optionality for oil trading and this is exactly what traders need.”
Shale oil and gas has transformed global energy markets. The production boom provoked the Organization for Petroleum Exporting Countries into a market-share war that drove crude prices down from above $100 in 2014 to below $50 today. Through a combination of technological advances and more efficient production methods, the industry proved more resilient to the downturn than most people expected. So when OPEC changed tack in November and started cutting production to boost prices, U.S. output surged again to the highest since 2015. 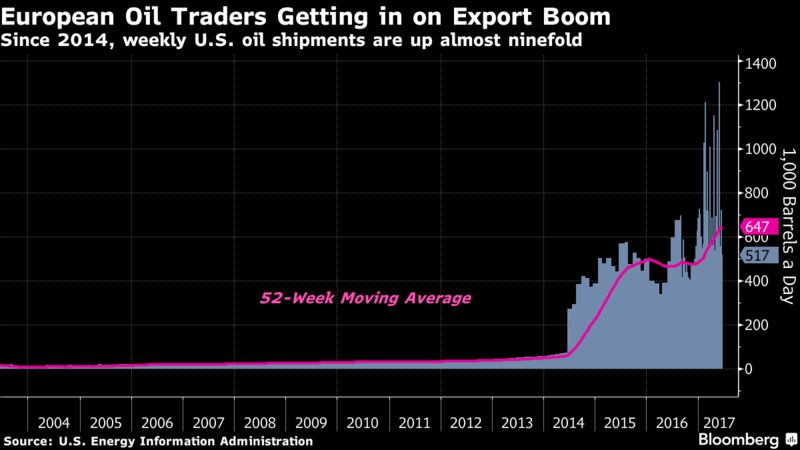 In early 2016, Geneva-based Mercuria, one of the five biggest independent energy traders, acquired a crude supply and marketing business from Enterprise Crude Oil LLC that gave it access to more than 150 new counterparties including shale producers in North Dakota, Wyoming and Colorado. It also invested in a petroleum and chemicals storage terminal on the lower Mississippi River in Mt. Airy, Louisiana to expand its relationships with small and medium-sized U.S. producers.

The Swiss trader is said to be preparing an offer to buy a controlling stake in Argentinian shale oil and gas producer Andes Energia Plc.
“We take a long-term view on investment in energy in the Americas. This complements Mercuria’s activities across the energy spectrum and fosters our commitment to support our counterparties’ needs,” Mercuria spokesman Matt Lauer said in a statement.

Trafigura, based in Singapore with its main trading operations in Geneva, unveiled an agreement this week with Plains All American Pipeline LP to receive as much as 100,000 barrels a day of crude and light oil called condensate pumped from the Permian basin, the massive shale region in Texas that the trading house says is the fastest growing oil exploration area in the U.S.

The firm had already established a businesses in Texas to source crude and other petroleum products from shale drillers in the Eagle Ford and Midland areas. The Plains agreement will secure additional supplies for its processing facilities and export terminal at Corpus Christi.

That will boost Trafigura’s role in U.S. crude oil and products exports by connecting “producers in the Permian basin to our significant logistics infrastructure, global customer base and marketing power on a long-term basis,” Kevin Jebbitt, Trafigura’s co-head of crude oil trading, said in a statement.

U.S. crude shipments surpassed 1 million barrels a day for the first time in February and are up almost ninefold on average since June 2014.

Both Mercuria and Trafigura have said they are targeting U.S. sales to customers in Asia, where both firms have strong relationships.

“There is strong demand for the crudes from Asian markets, especially China,” a Trafigura spokeswoman said.

Vitol, the world’s biggest independent oil trader that handles more than 7 million barrels a day, was the first trader to export U.S. crude when the moratorium was lifted. Mike Loya, the head of the Netherlands-based firm’s operations in the Americas said in March that he expected shipments to rise, with shale production seen increasing by 600,000 to 700,000 barrels a day in the year through December.

Unlike its peers, Vitol has sold much of its U.S. shale-related infrastructure as Loya said the trader has now gained enough market intelligence around the Permian basin that it no longer needs to own a terminal.

Traders are showing their confidence about the future of shale, said Lambert, the independent consultant.

“Trafigura’s move in the States proves this and Mercuria’s acquisition in Argentina, which has the second-largest shale potential after the U.S., is more evidence,” Lambert said “I would not be surprised to see more initiatives in this space.”