The U.S. economy is behaving mysteriously. Usually wage growth accelerates when the job market is tight: Employers have to pay more to attract and retain workers. But even though the unemployment rate hit a decade low of 4.4 percent in April, average hourly earnings grew just 2.3 percent over the past year—compared with an annual rate of more than 4 percent the last time the jobless rate was this low.

What has happened to the historical, and seemingly logical, link between unemployment and wages? A lot of people want to know, including the policymakers at the Federal Reserve, who’d ordinarily be raising interest rates much more than they have to prevent a wage-price inflation spiral. In the absence of a single convincing explanation, here are eight theories.

One is that the Phillips curve is effectively dead. In textbooks, wage growth is on the vertical axis and unemployment on the horizontal: The curve goes smoothly down to the right as unemployment rises and wage growth falls. In reality, the correlation has been so inconsistent in recent years that a Phillips curve graph looks more like a Jackson Pollock drip painting or the footprints of a staggering drunk. Steve Forbes, the editor-in-chief of Forbes and former Republican presidential candidate, calls the curve “a quack theorem.”

Economists aren’t as quick as Forbes to reject the Phillips curve; it just makes intuitive sense that a tight labor market such as this will eventually push up wages. So some fall back on the explanation that workers’ bargaining power has weakened. The decline of unions is a crucial factor, says Peter Temin, a retired MIT economics professor and author of a new book, The Vanishing Middle Class: Prejudice and Power in a Dual Economy. The Bureau of Labor Statistics says fewer than 11 percent of wage and salary workers were union members last year, down from 20 percent in 1983. Globalization has also weakened the leverage of American workers, says Jonas Prising, chairman of Manpower Group, by allowing companies to shift production where wages are cheaper. “Whether you know it or not, you are competing on a global scale,” Prising says. 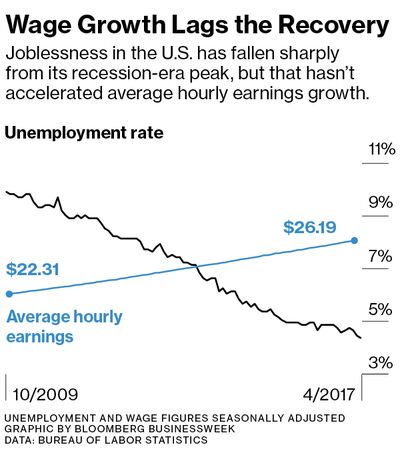 It could be that workers are content with what they’re earning. Employees will be more willing to settle for small raises if they’re confident inflation will remain low, as it has since the recession of 2007-09. The tortoise-like pace of wage hikes has beaten the snail-like pace of consumer prices by almost 5 percentage points since unemployment peaked at 10 percent in 2009.

Alternatively, maybe companies are making do with the workers they have—retraining employees rather than paying top dollar for new recruits and raising pay only for the particular jobs where they need to attract talent. “We have very robust development programs to make sure that we got the right labor at the right time and the right place,” Todd Teske, chief executive officer of Briggs & Stratton Corp., which makes lawnmowers and other products, told analysts in an April earnings call.

Then again, maybe the workers simply aren’t worth more money. Output per hour of work has shrunk in four of the past six quarters, according to the BLS. If workers’ productivity is weak, companies may be resisting their wage demands to protect their profit margins, says Daniel Silver, an economist at JPMorgan Chase & Co. Weak productivity growth isn’t entirely workers’ fault: Companies have chosen to stash profits offshore or return them to shareholders rather than invest in the modern equipment and software that would enable their employees to do their jobs efficiently.

Some economists explain the Phillips curve anomaly by saying there’s more slack in the labor market—and therefore less leverage for workers—than the 4.4 percent unemployment rate indicates. Only 78.6 percent of people age 25-54 are employed, down from 80 percent before the last recession. If workers demanded big wage hikes, employers could try to pull people off the sidelines into the workforce. “The unemployment rate is not measuring the tightness of the labor market in the same way it used to,” says James Diffley, chief regional economist for IHS Markit Ltd., which collaborates with payroll services company Paychex Inc. on an index of small-business jobs.

Other economists argue the real problem is that wage growth is being undermeasured. Neil Dutta, head of economics for Renaissance Macro Research, wrote in a May 15 note to clients that the oft-quoted average hourly earnings gauge devised by the BLS may not accurately capture what’s happening in the labor market. It’s true that average hourly earnings growth didn’t accelerate from the first quarter of 2016 to the first quarter of 2017, but other wage indicators from the BLS did, in some cases dramatically. Hourly compensation, which includes benefits along with wages and salaries, grew 3.9 percent in the 12 months through this year’s first quarter, up from 2.4 percent a year earlier. The wages and salaries measure in the Employment Cost Index rose 2.6 percent, up from 2 percent a year before. “Taking an average of all measures points to underlying wage growth of about 3.0 percent,” Dutta wrote. Consider construction: Desperate for skilled help, builders are showering workers with pay hikes and even signing bonuses, says Joseph Natarelli, a partner and head of the construction practice at Marcum LLC, an accounting and advisory firm. Yet according to the BLS, average hourly earnings in construction rose just 2.1 percent in the year through April. Says Natarelli: “I don’t know where that data is coming from.”

Last but not least is the theory that bigger wage increases will begin to appear soon—the forces of supply and demand can’t be denied. Last year, Federal Reserve Board Principal Economist Jeremy Nalewaik released a paper called Non-Linear Phillips Curves With Inflation Regime-Switching. The thrust was that the famous curve has a sharp bend: There’s a wide range of unemployment rates where wage growth is unaffected, but below a certain threshold, wages begin to rise rapidly. “It would be unwise to assume the Phillips curve remains so flat at all levels of the unemployment rate,” Nalewaik wrote.

Some members of the Federal Open Market Committee (FOMC), the rate-setting arm of the Federal Reserve System, seem to be swinging in Nalewaik’s direction. Eric Rosengren, president of the Federal Reserve Bank of Boston, who was once a dove on monetary policy—favoring low interest rates—has become a hawk. In a May 10 speech in Vermont, he argued that the jobless rate is on the way to “overshooting”—becoming too low for comfort. He urged three quarter-point hikes in the federal funds rate over the rest of the year, vs. the median projection of two hikes among FOMC voters. Many economists simply don’t believe wage growth will remain modest with unemployment headed toward 4 percent or lower. Says JPMorgan’s Silver: “The logic behind the Phillips curve just makes sense.”