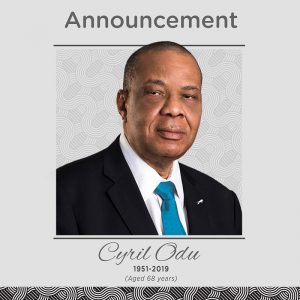 Union Bank Plc., Thursday announced that its board chairman, Cyril Odu has passed on.

A statement from the bank made available on its twitter and instagram handles indicated that the seasoned banker died on Tuesday, September 17 after a brief illness.

“Mr Odu was an outstanding leader who brought a wealth of experience and intellect to his role as Chairman,” the Bank said in the statement.

“The entire Union Bank family mourns his loss. Our deepest sympathies go to the Odu family, his friends and colleagues.”

It added that the deceased’s funeral arrangements will subsequently be announced by the family.

Prior to his appointment as chairman, Odu was the chairman of the bank’s risk management committee and served as a member of the finance and general purpose and credit committees.

His 40-year career at ExxonMobil saw him rise from trainee to vice chairman of the board of Mobil Producing Nigeria and chief financial officer of ExxonMobil Upstream Companies in Nigeria, making him the highest ranking Nigerian in the organisation until his retirement in 2012.

During the span of his career at ExxonMobil, he served in many technical and managerial functions including associate geologist, treasurer, controller, project finance director (Europe, Middle East and Africa), country HR manager and general manager, planning and new business development.

After his retirement from Exxon Mobil in 2012, Odu joined African Capital Alliance and then became chief executive of the firm.

Shares of the bank following the announcement, stayed solid at N7 with 19 trades worth N702,047.25 conducted.

Rewane: No recession in view for Nigeria