Wall Street’s main indexes on Tuesday slipped from all-time highs set in the previous session, after a slump in the shares of Google-parent Alphabet following a revenue miss and a drop in Apple ahead of its results. 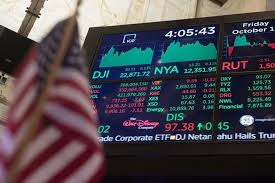 The S&P 500 and the Nasdaq broke above record levels on Monday as investors took comfort from a largely positive earnings season, benign inflation data and hints of progress in U.S.-China trade talks.

Alphabet Inc shares tumbled 8.56% and were on track for their worst decline since December 2008, after the company also posted its slowest revenue growth in three years.

The S&P communication services sector slid 3%, the most among the 11 major S&P sectors and was on pace for its biggest percentage fall in over four months.

Apple Inc dropped 2.46% ahead of results later in the day, which will wrap up earnings for the high-growth FAANG stocks. Shares of Amazon.com Inc, Facebook Inc and Netflix Inc also slipped between 0.3% and 1.5%.

“People are definitely taking some profits off names like Apple, Google. There could be a little ‘peaking’ mentality here considering how indexes are at record levels, people tend to get a bit cautious,” said Jeremy Bryan, portfolio manager at Gradient Investments in Arden Hills, Minnesota.

“Large-cap companies have generally reported better-than-expected numbers but not the kind that would accelerate a rally.”

With over half of the S&P 500 companies reporting, analysts now expect a 0.7% rise in first-quarter profits, a stark reversal from a 2% fall estimated at the beginning of the month, according to Refinitiv data.

Mastercard Inc rose 1.58% to a record high after the card company beat estimates for quarterly profit.