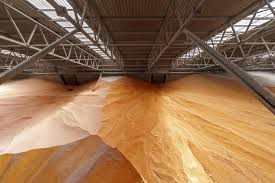 China used a flawed and opaque approach when it administered tariff-rate quotas for rice, wheat, and corn, the Geneva-based arbiter of global trade disputes said on its website.
China’s tariff-rate quota “administration contains legal flaws from the beginning through to the completion of the process,” the text of the ruling said.
The decision could increase U.S. farmers’ access to China at a time when they are struggling to compete amid the fallout from Trump’s trade war. The U.S. Department of Agriculture previously said that Beijing’s actions prevented an additional $3.5 billion worth of crops being imported into China.
The ruling “will help American farmers compete on a more level playing field,” the Office of the U.S. Trade Representative said in an emailed statement after the decision. “The administration will continue to press China to promptly come into compliance with its WTO obligations.”
Either the U.S. or China may appeal the case at any point in the next 60 days. If the ruling is upheld, China must revise its quota programs or face the prospect of trade retaliation from Washington.
As part of China’s WTO accession agreement, Beijing pledged to set specific quota levels for wheat, corn and rice by applying a lower tariff rate to imports up to a certain quantity and then applying higher duties to imports that exceed the threshold. The U.S. complaint alleged China never reached its agreed-upon threshold despite lower global prices that favored the importation of grains into China.
The panel separately rejected U.S. allegations that China violated its public notice obligation related to tariff-rate quotas. The U.S. had alleged that Beijing’s procedures were not clearly specified and prevented exporters from filling the quotas.