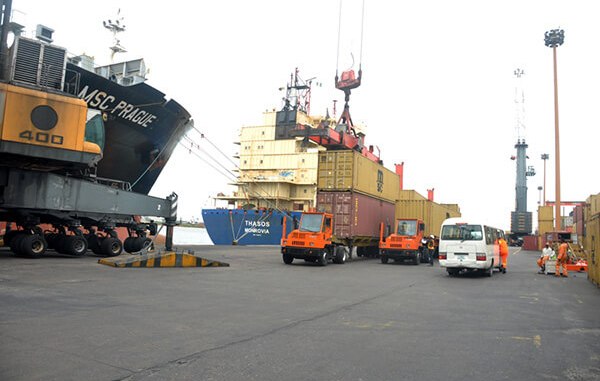 Concessionaire of Nigeria’s largest container terminal, APM Terminals Apapa Limited, says exportation throughput at the port in Lagos rose by 18 percent to hit 25 percent in 2019 from just seven percent in early 2018, a figure customs clearing agents said may not be true while calling on the terminal to invest more in cargo handling equipment.

West Africa’s largest container terminal reported at the weekend that “favorable policies” from the Nigerian government were responsible for the uphive in exportation activities at the port in 2018 and 2019.

Odibe Daniel, head, Public Relations, APM Terminals told a delegation of the Nigerian Shippers’ Council (NSC) who visited the terminal on Friday, that the terminal was poised for increased trading.

“APM Terminals is contributing to the federal government’s economy drive to improve the economy. We are now doing export around 25 percent. It was about seven percent in early 2018. So, the significant growth in export happened in 2018 and 2019 due to favorable government policies,” Odibe said.

However, responding to the figures, customs agents said it was difficult to confirm the growth in export throughput as claimed by APM Terminals.

They called on the terminal to invest more in equipment maintaining that equipment are still not enough at the terminal, despite its large size.

“We can’t confirm the reported growth in export at APMT, but we can state the fact that equipment are not enough at APM Terminals. The terminal needs to invest more in equipment,” said Olumide Fakanlu, a leader of clearing agents under the auspices of ANLCA at Apapa port.

Meanwhile, the NSC has called on terminal operators not to charge demurrage on containers that came in during the yuletide.

Hassan Bello, executive secretary of the NSC, made the call when he led the NSC’s team of enforcement and monitoring officers on a working visit to the APM Terminal in Lagos.

He cautioned that it was necessary that  terminal operators not cash in on the congestion caused by the yuletide as an opportunity to impose extra costs on containers.