Apiculture, commonly known as bee farming is the breeding and management of bees commercially for the production of honey, beeswax, propolis, flower pollen, bee pollen and royal jelly; valuable products which are not only economically viable, but considered as uniquely beneficial to human health since time immemorial.
The demand for bee products has continuously expanded globally, supported by an increasing global awareness among health-conscious consumers. Moreso, the commercial relevance of bee products has recorded a significant rise driven by their utilisation by several industries, especially in the pharmaceutical, cosmetic and foods/beverages sector. 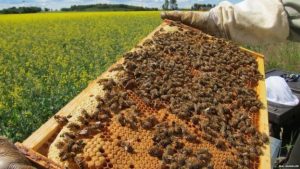 Economic benefits/market opportunities in bee farming
Market analysis by Global Industry Analysts Inc.,one of the world’s largest customer research companies, showed that the global apiculture market was worth an estimated $9.5 billion in 2020 and is projected to reach a revised size of $11.8 billion by 2026,growing at a compound annual growth rate (CAGR) of 3.6 per cent over the analysis period. The steady growth is considered to be fueled by Increasing inclination towards healthy food, growing demand for sustainable living and advanced industrialisation.
One of the most economically valuable products of bee farming is the production of honey, a sweet-tasting syrupy liquid secreted by honey bees before being processed into a commercial consumable.
Honey is regarded by health practitioners as an excellent natural source of basic nutritional components, including calcium,vitamins,minerals and antioxidants. In addition, it has proven to contain several medicinal and healing properties with the ability to help maintain blood pressure levels, improve metabolic activities, control the risk of diabetes, among other uses. On the upside, its application in the cosmetics, pharmaceuticals and food $ beverages industries sits as a major driver to market growth.
According to a market report by business data platform Statista, the global honey market was valued at about $7 billion in 2019, and is projected to reach over $11 billion by 2027.
China is ranked the world leading producer of the commodity, with an average production volume of 500,000 metric tonnes of honey annually. The Asian powerhouse is also a dominant exporter of honey, while Europe accounts for the largest market share of an estimated 34 per cent of global production.
Ethiopia is ranked Africa’s biggest honey producer with an average of 45,000 to 50,000 tonnes of honey a year, while Nigeria’s production is estimated at an average of 20,000- 30,00o tonnes annually.
Another valuable product from bee farming is bee wax, a natural yellowish wax produced by bees which is formed into scales the wax-producing glands in the abdominal segments of worker bees. The commodity is globally recognised as a multi industrial raw material used in the production of wood polish, leather,cosmetics, brass casting,highly valued candles,lubricant, among other products.
According to a report by MarketWatch, an online business data provider, the global bee wax market size was valued at an estimated $60.67 million in 2020 and is anticipated to surpass $69 million by 2027 at a CAGR of over two percent between 2021-2027.
Propolis is another substance produced from bee farming that holds a lot of commercial significance. It is widely used as an antibiotic and also to prevent and cure sinusitis, a medical condition. Due to its medical relevance, it is highly demanded by pharmaceutical industries.
The global propolis market was valued at $607 million in 2020 and is expected to record a CAGR of 5.48 per cent between 2021-2026, according to a market report by market research firm, Mordor Intelligence.

Nigeria missing out on economic potential
In his assessment of the bee farming sector, Lot Egopija, consul-general of Nigeria in New York, described the business as an untapped gold mine with the potential of generating over $10 billion in annual revenue for the country if properly exploited.

According to the envoy, a barrel of honey costs more compared to a barrel of crude oil, which is currently Nigeria’s most dominant export commodity. He added that in addition to the production of honey, bee farming yields by-products including beeswax, bee venom, and propolis which have industrial use in the pharmaceutical, food and beverage industries.
Despite its global recognition as a significant revenue earner for farmers, marketers and other stakeholders in the value chain, analysts averred that bee farming in Nigeria is not yet on a large scale farming and production is way below the potential economic value. It has also been observed that asides honey, other by-products of bee farming are in a negligible state.
Dooshima Kwange, an animal health consultant and erstwhile chief veterinary officer, Federal Ministry of Agriculture and Rural Development (FMARD),streesed that bee farming is an attractive venture in the sense that, honey, one of its most prominent derivatives can be consumed by virtually everyone without any religious, health or whatsoever discrimination and is regarded as one of the most healthy nutritious components produced by an animal.
Kwange however noted that the different high products that bees produce are really untapped in Nigeria and the number of people venturing into bee farming and its resultant value chains are low in relation to its economic valuation.
According to her, bee products possess a wide variety of uses in Nigeria and at the international level and one of the most valuable resources from bee farming is honey of which Nigerian honey is in high demand because of the country’s rich vegetation and environment which supports bee breeding. Kwange added that Nigerian honey has a special attractive aroma superior to the one from non-tropical regions of the world.
Speaking on the state of bee farming in Nigeria, Ademola Adesina ,chairman of A & Shine International Ltd , a honey production and marketing company in Abuja, noted that the honey market is huge both at the international and local levels, with a high turnover in revenue generation.
He added that the vast vegetation and the climatic condition of the country is such that honey can be produced from anywhere in the country.
On the country’s production level in relation to demand, Adesina said the method of production is not advanced enough to meet the international standard as producers generally suffer from deficiencies in storage and packaging which makes many of their output unsuitable for the export market.
“Not until we move away from the traditional beekeeping to modern beekeeping, we will not be able to meet the standard expected for the export,” he noted.
In a chat with Business A.M, Israel Onoja, a bee farmer in Anyigba, Kogi State,said there is little awareness about the economic potential of the business.
He further stated that bee farming in Nigeria has been affected by numerous challenges including, infrastructure deficit,poor record keeping, low sensitisation of farmers,insecurity, uncontrolled tree cutting/bush burning, and lack of properly structured market linkages.
Though bee farming is still an underdeveloped agricultural activity in Nigeria, the economic benefits of the value chain cannot be disregarded, particularly in a country where economic diversification into the non-oil sector is of utmost consideration.
To maximise the potential of bee farming in Nigeria and position it to compete favourably with other sectors of the economy, stakeholders in the sector highlighted some recommendations.
To manage the bee hives to achieve maximum profitability,Dooshima Kwange said it is necessary for the farmers to understand the behaviour, characteristics, biology and anatomy of the bees.
“Every beekeeper needs to understand the process of the bee society, for instance how the bee colony is constituted and organised,” she said.
Kwange also urged the government to establish more forest and game reserves across bee producing areas to prevent destruction of their natural habitats.
Onoja suggested that government and corporate bodies can assist farmers in the provision of modern beehives facilities to encourage improved productivity.
He added that training and sensitisation initiatives should be conducted regularly to create public awareness on the job creation prospects and financial benefits of bee farming.