One of the most prominent staple food today is Pasta. Ease of its preparation and relative affordability has increased its patronage. This has caused more Pasta brands to spring up, both local and foreign. Improving product quality, attractive packaging, variants in multiple sizes, and ensuring affordability are factors 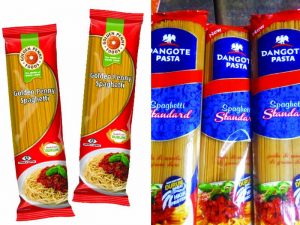 manufacturers of Pasta in Nigeria are leveraging on to gain control of their sector’s market share. Pasta is made from unleavened dough of durum wheat flour. There are different types of Pasta: Spaghetti, Macaroni, Fettuccine, Fusilli etc. Spaghetti and Macaroni are by far the most popular types all in the country. However, customers are eating much of Spaghetti than Macaroni in Nigeria. Many persons attributed this to Spaghetti’s slippery nature. Spaghetti is a long, thin, and dried pasta made from durum. It can be enjoyed at any time of the day and in so many ways. Cooked plain with sauce, fried with vegetables, as Jollof, or as fillings for salads.

Even though the pasta market is saturated with many brands, Golden Penny Spaghetti and Dangote Spaghetti are the most popular. Here’s what we found out about these two brands:

•  Both Dangote and Golden Penny Spaghetti are light and easy to cook pasta made from durum wheat semolina.

•  Golden Penny pasta does not get soggy (overdone) when cooked like many other brands. According to a few consumers, Dangote Pasta requires drops of vegetable oil to keep it from sticking together in the pot as it tends to get soggy.

•  While both Pasta is rich in protein. The amount of protein is 13g/100g in Golden Penny Spaghetti and 11.5g/100g in Dangote Spaghetti. Additionally, Golden Penny is marked as a no cholesterol pasta.

•  One consumer mentioned that the routine consumption of Golden Penny Pasta (once a day) helps her lose weight.

•  Several nutrition studies actually show that people who eat pasta regularly lose weight, as it is a lower-carb option.

•  However, it should be noted that pasta has a low glycemic index (low GI), and causes small increases in blood sugar.

•  Dangote Pasta has improved products and is rebranded in a new package.

•  Chefs and restaurateurs suggested that Dangote Pasta is best for preparing continental dishes like Spaghetti cabonara, Jollof, or fried, with or without vegetables.

•  The durum wheat taste is far more pronounced even after parboiling in Dangote Pasta than Golden Penny Pasta.

So far, Golden Penny Pasta and Dangote Pasta have edged out all others in the competition for market share. However, there is no doubt an intense competition lingers in this market even as more pasta brands are being introduced now and then. Both brands must continuously improve on the distribution channel and value proposition to remain the kings of this market.