World shares inched higher on Tuesday as investors awaited a speech by President Donald Trump on U.S. trade policy and on news he was likely to delay a decision on European auto tariffs. 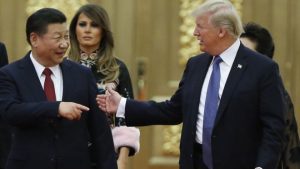 Bond markets also seemed increasingly confident a recession will be avoided as EU officials said Trump was expected to announce this week that he was delaying the tariff decision on EU cars and parts for another six months.

The news boosted expectations about Trump’s speech later in the day and for some resolution to his administration’s long-running trade war with China.

The pan-European STOXX 600 shuffled 0.2% higher, back towards 4-year highs helped by upbeat chipmaker shares. MSCI’s broadest index of Asia-Pacific shares outside Japan had climbed 0.5%, following a sharp 1.2% pullback on Monday.

Japan’s Nikkei, which dithered either side of flat most of the day, ended 0.8% higher. But Shanghai blue chips eased 0.2% after bank lending growth undershot analysts’ estimates, while Australian shares were down, too.

“I think that there will be some kind of deal that comes of all of this,” Marshall-Lee said, adding that whatever emerges both Washington and Beijing will want to claim it as a win domestically.

Trump wrongfooted markets over the weekend when he said there had been incorrect reporting about U.S. willingness to lift tariffs on China.

Investors were also anxious about the situation in Hong Kong after a violent escalation of protests had knocked 3% off the Hang Seng and nearly 2% off Asia-exposed banks HSBC and StanChart in recent days.

Hong Kong’s embattled leader Carrie Lam on Tuesday said protesters who are trying to “paralyze” the city were extremely selfish and hoped all universities and schools would urge students not to participate in violence.