British Airways resumed some flights from Britain’s two biggest airports on Sunday after a global computer system failure created chaos, but hundreds of passengers were still waiting for hours at London Heathrow.

BA said it aimed to operate the majority of services from Heathrow and a near normal schedule from Gatwick, the capital’s second busiest airport. Heathrow, however, said it expected further delays and cancellations of BA flights.

At Heathrow’s Terminal 5, where BA is the dominant carrier, hundreds of passengers were waiting in line on Sunday and flight arrival boards showed canceled flights.

Some passengers were curled up under blankets on the floor or sleeping slumped on luggage trolleys. Several passengers complained about a lack of information from BA representatives at the airport. Others said their luggage had been lost.

“We are continuing to work hard to restore all of our IT systems,” BA added in a statement. “We are extremely sorry for the huge disruption caused to customers.”

When asked about the disruption at Heathrow, a BA spokeswoman said: “We appreciate that this is a very trying and distressing experience for customers and we are doing everything we possibly can to get them away on their flights as soon as we can.”

Gatwick and Heathrow told passengers not to travel to the airports unless they were rebooked on other flights. [nL9N1HZ012]

British Airways canceled all its flights from Heathrow, Europe’s busiest airport, and Gatwick on Saturday after a power supply problem disrupted its flight operations worldwide and also hit its call centers and website. [nL8N1IT0AF]

A spokeswoman for BA could not immediately detail the exact number of flights canceled on Saturday.

Alex Cruz, the chairman and chief executive of BA, part of Europe’s largest airline group IAG, said there was no evidence of any cyber attack. 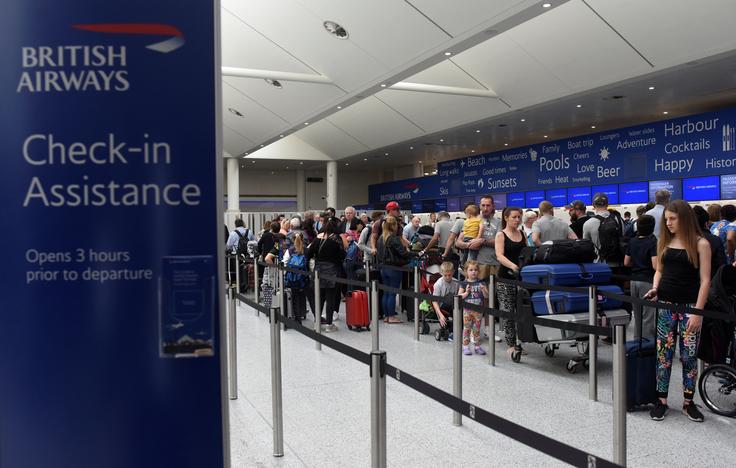 Thousands of passengers queued for hours in departure halls at the airports on a particularly busy weekend. Monday is a public holiday and many children were starting a one-week school holiday.

While British Airways could face a one-off financial hit from the cancellations, the risk to its reputation among customers could be more damaging in the long-term effect.

It is already facing declining customer ratings following unpopular decisions made as it faces competition from low-cost airlines. These include starting to charge for food on short haul flights last year to cut costs.

Terminals at Heathrow and Gatwick became jammed with angry passengers, with confused BA staff unable to help as they had no access to their computers, according to passengers interviewed by Reuters.

Some passengers expressed frustration on Twitter over missing bags and long waits in telephone queues to speak to BA staff.

“We are refunding or rebooking customers who suffered cancellations on to new services as quickly as possible,” BA said, adding that it had introduced more flexible rebooking policies for passengers affected.

While other airlines have been hit by computer problems, the scale and length of BA’s troubles were unusual.

Delta Air Lines Inc canceled hundreds of flights and delayed many others last August after an outage hit its computer systems. Last month, Germany’s Lufthansa and Air France suffered a global system outage which briefly prevented them from boarding passengers.