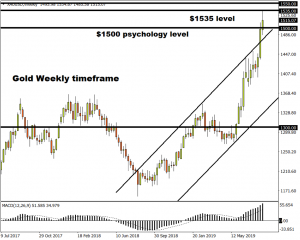 The latest inflation figures from the Nigerian economy are certainly good news for the Central Bank of Nigeria (CBN) and the economy as a whole.

Inflation in Africa’s largest economy dropped to its lowest in a year at 11.1% last month as food prices and services reduced in July compared to June. Further signs of inflation cooling during the third and fourth quarter of 2019 should present the CBN an opportunity to re-join the global easing bandwagon – ultimately supporting domestic economic growth. While the exact timings of the rate cut remain uncertain, it now remains a matter of when rather than if. Lower rates in Nigeria have the potential to stimulate consumption which accounts for roughly 80% of GDP.

Markets search for stability as we head into the weekend

It has been a rollercoaster trading week defined by heightened trade uncertainty, yield curve inversions and global recession fears.

The “risk off, risk on” pendulum swung back and forth as investors grappled with conflicting signals on the US-China trade front, disappointing economic data from China and Germany and depressed oil prices.

Some semblance of stability is returning to Asian markets on Friday after China hinted at more fiscal support for its economy. While European markets are set to open cautiously higher as investors closely monitor the Treasury yields, gains may be limited by the general unease and uncertainty which is shrouding financial markets.

All eyes remain on the yield curve…

History was made this week after the yield on the 30-year Treasury bond fell below 2% for the first time ever.

Market players offloaded riskier assets like a hot potato and rushed to perceived safe havens like bonds and Gold as trade tensions and global growth fears promoted risk aversion. Although treasury yields are climbing away from record lows on Friday as some tranquillity returns to markets, the movements in the bond markets are poised to remain on investors radars in the week ahead.

King Dollar has appreciated against almost every single G10 currency this week excluding the British Pound and Australian Dollar.

The Dollar’s positive performance suggests that it is still viewed as a destination of safety amid trade disputes, geopolitical tensions and global growth concerns. Appetite towards the Greenback was sweetened further on Thursday after US retail sales jumped by 0.7% in July, which eased concerns about the health of the US economy. I expect the Dollar Index to push higher based on price action, as the economic calendar for the United States is void of Tier 1 economic releases on Friday.

In regards to the technical picture, the Dollar Index is bullish on the daily charts. The intraday breakout above 98.20 should encourage a move higher towards 98.40.

Gold prices depreciated slightly on Friday morning but were headed for a third consecutive weekly gain thanks to global recession fears, uncertainty over US-China trade developments and falling US bond yields.

Gold bulls remain firmly in the driver’s seat and are set to switch into higher gear as geopolitical risk factors and lower interest rates across the globe send investors stampeding towards the precious metal. Focusing on the technical picture, Gold is heavily bullish on the weekly charts as there have been consistently higher highs and higher lows.