The dollar hit a multi-month low against the euro and the yen on Tuesday on the prospects of monetary easing by the Federal Reserve while the safe-haven Swiss franc and gold rose on Middle East tensions. 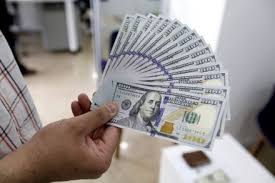 The euro hit a three-month high of 1.14105 dollars, having gained 2.0 per cent from a two-week low of 1.1181 dollars touched a week ago as the dollar has lost steam. It last stood at 1.1406 dollars, up slightly on the day.
The U.S. currency slipped 0.35 per cent to 106.93 yen its lowest since its flash crash in early January.
The dollar index against a basket of six major rivals fell to its lowest level in three months to 95.943, having lost 1.7% during the latest five sessions.
Selling in the dollar has accelerated after the U.S. Federal Reserve last week signalled it would cut interest rates before year-end on mounting worries about fallout from tariff wars President Donald Trump is waging against China and other trading partners.
U.S. bond yields dropped on Monday, with money market derivatives increasing bets on a 50-basis-point rate cut next month. A 25 basis-point cut is already fully priced in.
Fed Chairman Jerome Powell and a few other of its policymakers are due to speak later on Tuesday.
Investors are waiting to see whether Trump and Chinese President Xi Jinping would at least call a truce in their trade war when they meet at the G20 summit in Osaka late this week.
Trump considers his meeting with Xi an opportunity to “maintain his engagement” and see where China is on their trade dispute, a senior U.S. official said on Monday.
Senior Chinese and U.S. trade officials spoke by telephone on Monday.
Kazushige Kaida, head of the forex at State Street Global Markets in Tokyo, said he believes the current market consensus is that the two leaders are “unlikely to agree on a deal”.
If there’s no trade agreement, Trump’s administration could levy tariffs on an additional 300 billion dollars of Chinese imports as early as next month, a step that would cement expectations of a large rate cut by the Fed.
The dollar’s weakness was the most notable against traditional safe-haven assets, reflecting concerns about tensions between the United States and Iran.
Trump targeted Iranian Supreme Leader Ayatollah Ali Khamenei and other top Iranian officials with sanctions on Monday, taking a dramatic, unprecedented step to increase pressure on Iran, after Tehran’s downing of an unmanned American drone near the Strait of Hormuz.
The dollar slipped to 0.9710 francs, its lowest since late September.
The Swiss currency held firm against the euro to 1.1072 per euro, within touching distance of 1.1057 hit its highest on Thursday since July 2017.
Gold also shot up 0.85 per cent to 1,431.2 dollars per ounce, reaching its highest levels in nearly six years.
Even the price of bitcoin held firm, staying near a one-year high above 11,000.
“Assets that can be used as an alternative means of settlement are favoured, as the dollar is being shunned. Geopolitics and the Fed are two main reasons behind this,” said Ayako Sera, market economist at Sumitomo Mitsui Trust Bank.
The British pound remains dogged by Brexit concerns as Eurosceptic Boris Johnson is seen as likely to win a majority of votes from Conservative party members who will decide the next leader and prime minister.
Johnson reiterated his promise to take Britain out of the European Union on Oct. 31, with or without a deal.
The pound fetched 1.2743 dollars, capped by resistance around 1.2760-65 dollar.
Against the euro, the pound was on the back foot at 89.455 pence per euro, near five-month lows of 89.74 set a week ago.