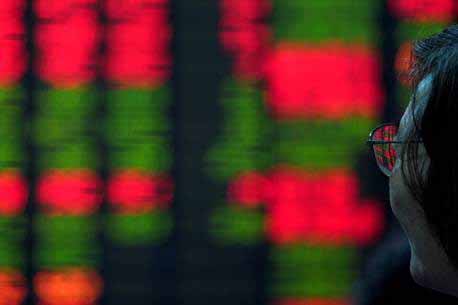 Bourses in Britain, France and Germany lost ground after the surveys on China manufacturing missed forecasts, offering another sign that Beijing’s efforts to spur growth in the world’s second-biggest economy have yet to bear fruit.

Those figures underscored questions over prospects for the Chinese economy, with investors across the world already on edge over growing signs of a two-speed global economy where a robust United States outpaces its peers.

Just before noon the Euro STOXX 600 was down 0.1 percent. British shares were off 0.2 percent while the German and French markets were flat and 0.2 percent down respectively.

Amid uncertainty on China’s prospects, investors in Europe focused on data that could offer clues to the health of their own region’s economy.

The euro gained a quarter of a percentage point after figures showed growth in the euro zone grew more than expected in the first quarter, a fillip after poor manufacturing inflation data last month.

German consumer inflation data is due at 1200 GMT. Inflation in the regions of North Rhine-Westphalia and Bavaria nudged up, data released ahead of the nationwide figures showed.

Inflation in the euro zone is the key issue for the bloc’s policymakers, said Michael Hewson, chief market analyst at CMC Markets.

“Unemployment is down, wages are starting to edge higher but inflation remains very subdued,” he said. “That is the biggest problem for the European Central Bank in terms of its policy response in trying to lift demand in the euro area.”

Beyond economic data, corporate earnings were another major factor on Monday.

Chipmaker AMS jumped 16 percent after beating forecasts for first-quarter profit. AMS is a supplier to Apple, which is due to report its results later.