Gold closed the week on a bearish note following remarks by Jerome Powell, the Federal Reserve chair, which signalled that the US central bank will likely keep raising interest rates in the short term to contain high inflation. 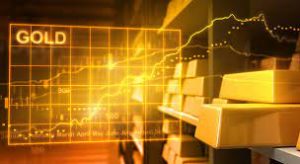 The US dollar index and the US treasury bond yields, currently on an upward swing, also weighed more pressure on gold as investors lost appetite for the yellow metal.

Market dealers observed that the yellow metal’s decline comes after Powell said during his speech at the Kansas City Fed’s annual policy forum that “restoring price stability will likely require maintaining a restrictive policy stance for some time”.

Commenting on this, Tai Wong, a senior trader at Heraeus Precious Metals, remarked that gold will fluctuate based on rate-hike expectations, trading around $1,680-$1,820 range in the near future.

On his part, Philip Streible, chief market strategist at Blue Line Futures in Chicago, explained that the development leans towards expectations that gold will continue to face pressure as it will have to deal with higher interest rates.

Sunil Kumar Dixit, chief technical strategist at SKCharting.com, said gold’s direction in the short term will depend on how the market digests the after-effects of Powell’s speech.

Though gold is considered a hedge against inflation for some of the most serious investors, analysts have observed that the precious metal hasn’t been able to live up to that billing since hitting record highs above $2,100 in August 2020.