The iPhone’s share of Apple’s total revenue has dropped below 50 percent for the first time since 2012, data from Statista has shown. 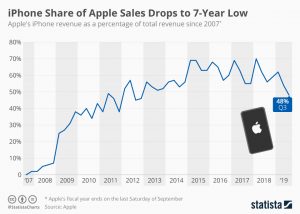 In the past quarter, iPhone sales dropped from $29.47 billion to $25.99 billion while Apple’s other segments all performed strongly the data mining firm said.

Apple will Tuesday 10th September, hold its annual launch event at its headquarters, where it will show off its newest iPhones and gadgets.

The event has been held every year since 2011, ahead of the holiday shopping season.

This year Apple is challenged with creating buzz in a declining smartphone market. Many expect that this year’s release will feature incremental changes, like a better camera, to its existing suite of devices.

After the first iPhone’s launch in 2007, it took less than three years for it to become Apple’s most important product in terms of revenue.

For the past five years, the iPhone has accounted for around 60 percent of the company’s net sales, with its importance peaking in Q1 2018 at 70 percent, shortly after the iPhone X was launched.