The Nigerian equities market opened the new week bullish on Monday as high cap stocks continued to catch the fancy of investors, a situation that helped the market’s all shares index (ASI) rise by 0.72 percent to reach 26,507.84 points. The year-to-date loss, therefore, moderated to 1.25 percent.

But the outcome of the day’s trading activities was not before analysts at Leads Capital made their ‘buy’, ‘sell’, ‘hold’ rating calls on a number of stocks, ten stocks of which they provided guidance that investors might want to consider throughout this week as activity revs up on the local bourse. 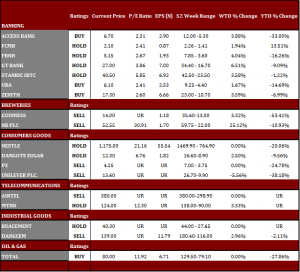 Fundamentally, eight of the stocks – four of them the usual banking sector suspects – Zenith Bank, MTN Nigeria, United Bank for Africa (UBA), FBN Holdings, Guaranty Trust Bank (GTB), BUA Cement, DangoteCement and Nestle were rated a ‘buy’ by the analysts, with two stocks, Guinness and Unilever, which have been having rough patches in their results of late rated a ‘sell’.

It is not too clear yet how investors will respond to this analyst recommendations by the end of the week, but if Monday’s trading is anything to go by, action already taken by investors on Zenith Bank’s stocks suggest that they could well act on them. For instance, the leading new generation bank’s stock was on top of trading activities on Monday in both volume and value of stocks traded.

However, driving the rating calls made on the 10 stocks with guidance by the Lead Capital analysts were a number of fundamentals, many of which were drawn from the numbers contained in the companies’ recently released financials. Advancing the different reasons, we present below the expert views of the analysts on why you should buy eight of the following 10 stocks and SELL two of them this week. Here we go:

ZENITH: Zenith bank showed commendable and resilient growth in its H1 2020 earnings, despite pressure on earnings due to the outbreak of the pandemic. Accordingly, the PAT expanded by 16.5 % to N103.8billion, mainly supported by growth in Non- Interest Income. Asset quality still remained strong, with NPL ratio at 4.7% and total assets expanding by 19.4% to N7.58trillion. Cost to Income ratio printed at 54.3%, indicating sustained cost efficiency in the bank. We therefore maintain our BUY rating on Zenith, on the back of a healthy balance sheet, strong performance and resilience.

MTNN:MTNN continues to remain the market leader in the telecommunications sector, accounting for 38.47% of the market share. It remains a fundamentally sound stock, with impressive growth in previous years.  Reviewing the second quarter earnings, despite the prevailing economic headwinds coupled with the impact of COVID-19, we saw service revenue grow 12.6%, on the back of revenue from digital (121.8%) and growth in the data subscription (57.6%). Consequently, we foresee a better performance in the third quarter due to continuous investment in its operations (Improvement in its 4G rollout). In addition, the company recently declared dividend of N3.5 kobo with a dividend yield of 2.95%.

UBA:United Bank for Africa remains one of the fundamentally sound banks in Nigeria with strong branch network within Nigeria and its presence in some Africa Countries, the UK, USA and France.  Reviewing Its H1’20 result, Although the bank recorded a weaker performance for the period at the bottom line, it however grew its Gross earnings by 2.24% year-on-year growth to N300.26 billion as against N293.69 billion recorded in H1’19. Consequently, despite the harsh disruption of economic activities occasioned by the novel Covid-19 pandemic, the bank’s deposit from Customers and other Banks rose by 45.8% to N5.31 trillion in H1’20, compared to N3.68 trillion in H1’19.

The bank’s total assets and shareholders’ funds also advanced by 7.7% and 2.46% respectively, to N6.8 trillion and N634.7 billion in the period under review, compared to N6 trillion and N597.9 billion recorded in H1’19. it also sustained profitability recording an annualized 14.4% Return on Average Equity. With a P/E ratio of 2.6x compared to its industrial average of 2.76x, this shows the stock is currently undervalued. Hence, UBA still remains a BUY with current Target Price of N12.70K.

FBNH:First Bank has showed resilience in its H1 2020 earnings, despite the economic disruption caused by the pandemic. Accordingly, Gross Earnings mainly supported by the Non-Interest Income, expanded by 5.8% to N296.4bn, with its bottom-line firming at N49.5bn, indicating as 56.3% increase. Asset quality remained strong amid economic uncertainties and high credit risk, as NPL ratio declined to 8.8%, as against 9.9% in the previous year, due to management’s effort to recover previously written off loans.

Cost efficiency strengthened, with Cost to Income ratio printing at 65.1%, compared to 70.3% in H1 2019. This was due to expansion in operating income and stable operating expenses. FBNH’s balance sheet remains strong, with total assets expanding by 14.9% to N7.13trn. Consequently, we maintain our BUY rating on FBNH, on the back of its strong performance and resilience.

GUARANTY:Guaranty Trust Bank filed it H1 2020 earning, with its Gross earnings expanding by 1.5% to N225.5billion. This was mainly supported by Interest income from loans and advances to customers. As expected, the banks experienced pressure on its earnings, due to the outbreak of the pandemic. Consequently, the PAT declined by 5% to N94.3billion. However, total assets increased by 20% to N4.51trillion, with a CAR of 22.9% which is well above the regulatory limit. Although earnings declined, we maintain our BUY rating on Guaranty Trust bank on the back of stellar performances over the years, a robust balance sheet and a best in class cost efficiency.

BUA CEMENT: BUA Cement delivered a strong performance, despite uncertain economic environment and disruption of economic activities triggered by the pandemic. Accordingly, revenue and PAT expanded by 12.69% and 13.74% to N101.26bn and N34.81bn respectively. Operational activity expanded, causing EBITDA to increase by 5.8% to N47.37bn, with EBITDA margin printing at 46.77%.  We expect continuous growth, as BUA Cement intends to grow its foothold in new markets, take advantage of operational synergies resulting from the merger and its ongoing expansion of its  Kalabmiana production line.

DANGOTE CEMENT:Dangote Cement filed its H1 2020 earnings, with revenue and PAT increasing by 2.0% and 5.8% to N466.9bn and N126.bn respectively. Despite the economic disruption caused by the pandemic, DangoteCement’s profitability remained strong. However, we expect significant revenue growth in the coming months, as majority of the Federal Government capital project would commence later this year.

NESTLE:Nestle Plc. has continued to report modest growth over the years, amidst the competitive environment of the food industry. Although its revenue decreased marginally 0.3% in Q2:20, a smaller decline than anticipated, on flip side we highlight growth in food revenue by 4.1% y/y, improving from the negative outing of 8.7% in its Q1. we recommend a buy rating on the back of its product portfolio and cost efficiency.

GUINNESS: The brewer released its first quarter earnings which showed weak performance with revenue declining 18% and its operating expenses growing 11% to N9.43bn in Q1’20 from N8.46bn in Q3’19 pressuring the operating profit to decline 38% to N1.66bn in Q1’20 from N2.69bn in Q3’19. We anticipate the downturn in earnings to persist in Q2’20, largely due to the impact of the COVID-19. In addition, the temporary close down of bars, hotels, and other major sales point is expected to pressure topline growth and future cash flows bounded with the sustained land border closure. We also note the rising debt coupled with low liquidity position of the company, hence at current prices, the Price-to-earnings (P/E) multiple of the Company stands at 15.00x. We revise our recommendation to a SELL.

UNILEVER: Unilever Nigeria Plc. unaudited Q2’20 results showed a deterioration, as revenue declined 0.40% from 0.31% recorded in the last quarter and a significant loss of 181.9% decline in its EPS, making it the seventh quarter of Y-o-Y revenue decrease. Specifically, the home and personal care segment reported a revenue decline of 45.6% from 41.0% in Q1, stimulated by competition of discounted prices from alternative products to its various products. Following lower material costs and improved cashflow. Looking ahead, we still expect the recent currency depreciation to put further suppress revenue. We hereby recommend a SELL