Local manufacturers in Kano, north central Nigeria, under the auspices of the Manufacturers Association of Nigeria (MAN), have enjoined the Standards Organisation of Nigeria (SON) on the need to protect local industries from redundant imports at the ports of entry as manufacturers gear up towards the African Continental Free Trade Agreement (AfCFTA). 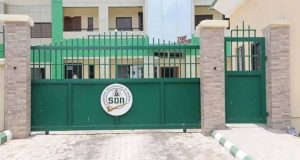 Ali Madugu, the national vice president of MAN, north west zone, made the call during a recent meeting in Kano which was attended by Farouk Salim, the director general, SON, and other stakeholders in the manufacturing industry.

Maduguemphasised on the need for SON’s inspection and quality verification of all imported products, including those from neighbouring West African countries to ascertain the rules of origin in the ECOWAS trade liberalisation scheme.

He added that the commencement of the AfCFTA in January further accentuates the need for SON’s presence and inspections at the entry points to prevent Nigeria from being turned into a dumping site for substandard, fake and counterfeit products from other African countries.

According to him, the need for product authentication as an additional tool to fight faking, adulteration and unfair competition with substandard products in the market should be made a priority for the safety of the Nigerian consumers.

He, however, cautioned SON to be discreet about implementing its duties to avoid putting genuine manufacturers at a disadvantage in terms of cost and the procedure for compliance.

In addition to Madugu’s statement, other members of the branch of MAN executive committee called for an upgrade and enlightenment of members on the SON offshore conformity assessment programme, as well as the inspection procedure, sampling and testing relating to the Mandatory Conformity Assessment Programme (MANCAP) for locally manufactured products.

On his part, Salim maintained that SON was set up to provide technical assistance and support to genuine local manufacturers as well as protect them from unfair competition from substandard products.

He expressed appreciation for their industry and commitment towards the country’s development through investment in infrastructure, creation of job opportunities and regular payment of taxes, which he described as a channel to growing the nation’s wealth.

He also assured the manufacturers of the organisation’s commitment and support towards the development of the local industries.