FX: The Naira kept its balance on the unofficial street currency market closing at N375 against the United States dollar while turnover spiked by 22.4 per cent in the Investors & Exporters Window (I&EW) to a weekly average of $161.4 million as against the $131.8 million recorded in the preceding week. Nevertheless, the Naira appreciated further by 0.15 per cent and strengthened by N1 per dollar in the I&EW to close at N394 per dollar from N395 per dollar in the prior week. Most participants maintained bids between N382 and N408.19 per dollar. 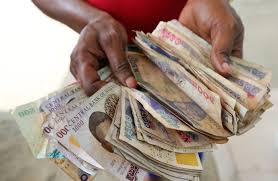 Moving on, money market rates remained in single digits, as the Overnight and Open Buy Back closed at 0.88 per cent and 0.5 per cent from 4.25 per cent and 3.63 per cent respectively in the prior week.

Activities in the fixed income market were largely bearish and speculative as market players sought clarity regarding the sale of “Special Bills” to banks as announced by the CBN. Following large sell-offs witnessed at the Bond, NT-bill and OMO-bill markets, average yield across the fixed income market spiked by 41 basis points week on week to settle at 1.9 per cent from 1.5 per cent in the prior week. The average yield at the NT-bill market soared for the week to 0.5 per cent from 0.1 per cent in the prior week as investors sold off their bills in anticipation of the influx of the “Special Bills”. Investors lost interest in all papers save the 14 OCT 2021 which closed the week bullish.

Furthermore, the anticipated “Special Bills” worth N4.1 trillion was issued to Deposit Money Banks on Thursday by the Apex Bank at 0.5 per cent for 81-DTM (21 March 2021). Nevertheless, the market is yet to grasp the full nature of the “Special Bills” and its modalities.

The Bond market was not spared, investors sold off holdings following the uncertainty prevailing in the market, thereby, and elevating average yields by 65 basis points to 4.7 per cent from 4.1 per cent at the close of trading in the prior week. The Debt Management Office (DMO) in its bond offer secular is scheduled to sell bonds worth N60 billion across the 12.50 per cent FGN MAR 2035 and the 9.80 per cent FGN JUL 2045 papers.

Oil prices surge above $70, highest since 2014 amid U.S.-Iran tensions

FG sets up panel to recover N614bn from 35 states