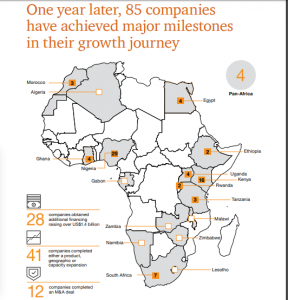 After listing 360 companies that will inspire Africa in 2019, the London Stock Exchange (LSE) in collaboration with PwC, Asoko Insight and the UK government has released a follow up report, naming major milestones that 85 of these companies have achieved in their growth journey in the past year.

From mergers and acquisitions, securing significant amount of financing, to joint ventures, Nigeria made up 34 percent of these 85 companies listed to have achieved landmark milestones in the last 365 days, based on data provided on their company websites.

According to Dion Shango, PwC Africa’s CEO, 28 companies out of the 85 secured over $1.4bn in financing, 41 completed a product, geographic or capacity expansion, 12 completed an M&A transaction, and 22 entered in to an alliance or joint venture.

According to Shango, private companies are the primary drivers of economic growth and employment within the private sector, as evidenced by the low GDP-to-market-capitalisation in several countries across Africa.

He highlighted the reason behind the commitment of his company’s partnership towards showcasing successful African private companies. “High unemployment remains a challenge across the continent. With the rate of population growth, unemployment may be the single biggest crisis we face,” Shango said. In the World Development Report it was pointed out that globally, 90% of all jobs are created in the private sector. Globally, people, you and me, more than anything, want a good job. The private sector is instrumental in bridging the unemployment gap in Africa. We therefore remain committed to this initiative as it highlights successful African private companies, which are crucial to driving the narrative in the global market on the many companies that are bringing transformative economic growth and inspiring our young population.”

Some of the Nigerian companies mentioned include Co-Creation Hub, a leading technology innovation centre in Nigeria, which acquired iHub, an innovation hub and hacker space based in Nairobi.

Mojec International, a leading power company in Nigeria, was also noted to have partnered with several local banks to facilitate the rollout of meters.

While noting that the next and third set of inspiring African companies will be unveiled in 2021, Nikhil Rathi, CEO of the LSE and director of international development, LSE Group said a notable trend from the report is the continued success of firms operating in the renewable energy space.

“This sector has one of the highest proportion of companies that expanded their business over the course of 2019. This underlines the growth of the ‘Green Economy’ in Africa and also serves as a reflection of LSEG’s own commitment to sustainable finance. Adding that the achievements of these inspirational businesses also tally with LSEG’s experience in African and international markets.

There are now 112 African companies listed in London, with an aggregate market capitalisation of $161bn. Over $22bn has been raised by these firms in London since 2008. Furthermore, London’s debt capital markets have over 50 active bonds from 14 African issuers, having raised $55bn.