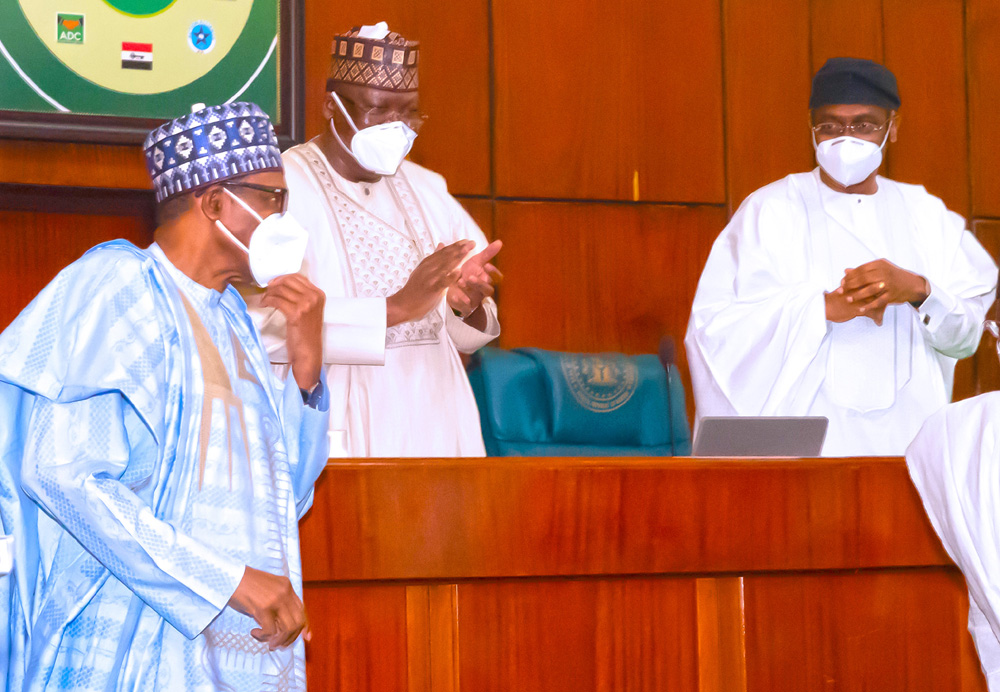 Nigeria’s President Muhammadu Buhari, on Thursday, appeared before the joint session of the National Assembly for the presentation of the proposed 2021 national budget of N13.08 trillion. The proposed budget, which is titled, “Economic Recovery and Resilience”, is aimed at promoting economic diversity as well as enhancing social inclusion.

At the presentation before the lawmakers on Thursday in Abuja, the president highlighted that the proposed budget consists of N5.65 trillion as non-debt recurrent expenditure, N3.76 trillion for personnel cost and N3.124 trillion for debt service. Consequently, the sum of N501.19 billion was set aside as pensions, gratuities and retirees’ benefits; overheads in the sum of N625.50 billion and a sinking fund of N220 billion to retire certain maturing bonds.

On the statutory transfers, President Muhammadu Buhari said the sum of N484.49 billion has been provided in 2021 budget. This amount is an increase of N56.46 billion or 13 per cent over the 2020 revised budget. The provisions include:

Planned recurrent expenditure, which is a major part of the budget, is allocated to paying salaries and overheads in MDAs which provide these critical public services. They include:

The president disclosed that capital expenditure remains focused on the completion of as many ongoing projects as possible rather than commencing new ones. Major highlights of the 2021 Capital projects with key spending allocations in the 2021 budget include:

ASSUMPTIONS IN THE PROPOSED 2021 NATIONAL BUDGET

During the budget presentation exercise by the president, he revealed that the total expenditure is put at N13.08 trillion with an oil benchmark price of $40 to a barrel and an estimated daily oil production of 1.86 million barrels, which is inclusive of the daily condensate barrels of 300 thousand to 400 thousand. Also, the proposed budget is hinged on an assumed inflation rate of 11.95 per cent, foreign exchange target of N379 per dollar and output (GDP) growth of 3 per cent.

Similarly, oil revenue is projected at N2.01 trillion and the non-oil revenue estimated at N1.49 trillion. Moreover, from the fiscal assumptions in place, the total federally shareable income is estimated at N8.433 trillion in the year 2021 while the aggregate revenue available to fund the national budget is placed at N7.89 trillion.
On financing the budget, the president announced that new borrowings which amount to N4.28 trillion will be used mainly for budget funding. Similarly, the sum of N709.69 billion in bilateral and multilateral loans secured for specific projects and programmes as well as the sum of N205.15 billion as proceeds from privatizations.