Nigeria’s 39.65 million and sub-Saharan Africa’s 44 million micro, small and medium-scale enterprises (MSMEs) are seeing their prospects fade away as crises and uncertainty have become a landmark of the new decade, with Russia’s war of aggression against Ukraine sending shockwaves through the global economy, according to a new OECD economic outlook. 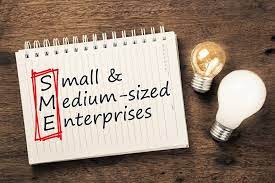 The swift turn in events leading to fading prospects for the SMEs came just as economies and societies were getting onto the path to recovery from the deep shock of the Covid-19 pandemic.

The OECD 2022 economic outlook anticipates that world growth would be 1.5 percentage point lower this year than projected last December. Whereas average inflation in OECD countries is expected to be more than four percent higher, driven by rising costs of food and energy.
“These are the overarching economic conditions under which businesses operate – they drive their demand and costs of operation. This is hugely worrying for SMEs who have endured 2 years of the COVID-19 pandemic and are heavily weakened,” the outlook said.
For Nigeria, Africa’s largest economy and the world’s most populous black nation, the conditions would be more critical, with the present government resorting to borrowing binges to make up for disappearing revenues. The consequence has been a shocking high debt-to-revenue ratio, with 118.9 percent reported from January to April this year, ranked as the worst in the world.
Since 2017, the country has lost at least 1.9 million of its SMEs due to the perilous economic situation in the country. According to a recent PricewaterhouseCoopers (PwC) report, at least 39,654,385 MSMEs operated in Nigeria as of December 2020 against 41,543,028 million that were in existence in 2017. Also, as of January this year, the MSMEs number in the country has further shrunken to 38,413,420 million.
PwC said SMEs contribute 48 percent of Nigeria’s national gross domestic product (GDP), account for 96 percent of businesses and 84 percent of employment in the country.
Bola Adigun, a financial expert at PwC, said recently that 80 percent of MSMEs that collapsed in Nigeria failed due to cash flow problems.
At continental level, MSMEs provide an estimated 80 percent of jobs across Africa. sub-Saharan Africa alone has 44 million MSMEs, almost all of which are micro.
Some financial experts who spoke to Business A.M. said, for these MSMEs to grow, create more jobs, and generate economic growth in Nigeria and Africa, they need access to capital. But the availability of this factor of production is now hugely uncertain, as the new OECD economic outlook indicated.
“Tighter access to finance, increased debt burden, reduced activity and profitability. With higher bankruptcies, lower investment and less equipped for the transitions, all these threaten recovery,” OECD outlook stated as the price of a troubled business environment.
It listed inflation/high energy prices, higher interest rates, lower demand, supply-chain disruptions, and labour market tensions on the economic impacts, which exacerbate vulnerabilities.
The OECD said according to some early perception surveys, there has already been a marked impact on MSMEs confidence and activity. A third of German SMEs see the Ukraine war as a medium to high risk to their business, particularly in the manufacturing and trade sectors. In Ireland, the Linked Finance SME confidence index fell from 67.9 to 61.1 in the first quarter of 2022. In March and April 2022, small-business sales year-on-year growth slowed in Australia, New Zealand and the UK and reached half the growth rates seen in March 2021. In Poland – geographically closer to the centre of the crisis – one in five SMEs reported having been forced to limit their business operations three weeks after the invasion.
The outlook said: “Rising costs are already beginning to bite. The rise in prices, in particular energy prices, was already the main concern for the business sector before the war in Ukraine. The increase in energy prices and other inputs is particularly challenging for SMEs because of their limited capacity to mitigate the shock. They have less ability to negotiate favourable conditions along their supply chain or with energy providers. They have limited capacity to pass the price increases on to consumers. They are squeezed in the middle.
According to OECD, however, “there may be a silver lining to the current shock. Current energy prices may incite SMEs to accelerate adoption of energy-efficiency measures.”
But the outlook advised on the need to focus on the longer-term objectives. “These measures will be essential to the survival of many SMEs. But it will be important that short-term subsidies do not distract from, or delay longer-term transitions. In the EU, National
Recovery and Resilience Plans have been developed which should help support longer-term SMEs’ investment needs, in particular to support their energy transition. Policy makers will need to monitor short-term measures closely to ensure they work to support, rather than counteract, longer-term objectives.”
Businessamlive Website Stats