Activities at the Nigerian Stock Exchange continued their bullish run Thursday with the All Share Index (ASI) rising by 19 basis points at the end of trading to close at 24,930.34 points as a result of buying interest in SEPLAT (+9.0%), STANBIC (+4.8%) and MTNN (+0.4%). 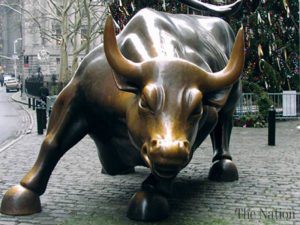 Investors gained N25.2 billion as a result of the bullish trading with market capitalisation rising to N13 trillion while year-to-date (YTD) loss eased to -7.1 percent.

In terms of the top traded equities by value, MTN Nigeria traded shares valued at N636.6 million to top the table. It was followed by Guaranty Trust Bank, which traded a value of N312.6 million, in second position; and Stanbic IBTC, with value of traded equities at N158.7 million came third.

Performance across sectors was bullish as four out of six indices closed in the green. The Oil & Gas and AFR-ICT indices advanced 4.4 percent and 0.2 percent respectively due to buying interest in SEPLAT (+9.0%), ETERNA (+4.4%) and MTNN (+0.4%).

Conversely, the Industrial Goods index led laggards, down 0.7 percent due to a price decline in BUACEMENT (-1.7%),  while losses in LINKASSURE (-5.0%) and NEM (-1.6%) dragged the Insurance index two basis points (2bps) lower.

“Following four consecutive bullish sessions and profit-taking witnessed earlier, we could see profit-taking activities drag market performance tomorrow (on Friday),” said analysts at Afrinvest, while adding that they expect the equities market to close on a positive note for the week.