Members of the leather products manufacturers association, under the aegis of LEPMAAS in Aba which hosts some 110,000 shoemakers and 50,000 garment makers, are rejigging their group in the face of the new business climate produced by the Covid-19 pandemic.

LEPMAAS is an association of shoe, belt, bag and trunk box makers in Aba. 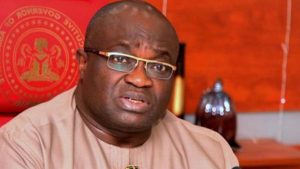 Aba, the commercial hub of Abia State, is believed to be home to a large concentration of micro, small and medium enterprises (MSMEs) in Nigeria, particularly in the fabrication, light manufacturing and leather, shoes, bags and garment sectors. The bulk of this number is engaged in leather works and garment making, which has made the city world famous.

It is estimated that Aba shoe industry is worth over N130 billion as its members produce a minimum of one million shoes weekly. Recently, Governor Okezie Ikpeazu brought in modern shoemaking machines to the area.

Production of shoes over the years in Aba is undertaken mainly by manual labour, using crudely fabricated machines, but greeted with a soaring demand across the West and Central African regions. The Aba shoe industry has been on business boom in recent years, beginning this year, as buyers come from countries as far as Gambia, Cote d’Ivoire, Ghana, Togo, Cameroun, up to Niger and Chad.

Business A.M. was informed that every week, traders from these West and Central African countries storm Aba industrial city to buy different product designs such as: shoes, leather bags and belts, which they say they find quite cheap, compared with foreign-made ones that come in from Europe and Asia (mainly China).

Okechukwu Williams, president of the Leather Products Manufacturers Association of Abia State (LEPMAAS) was re-elected by delegates from 14 of the 15 zones of the LEPMAAS to lead the association for the next three years.

Williams said their association has gone through some of the worst business experiences this year, as a result of the Covid-19 pandemic. He said, however, they were repositioning their business by infusing ICT in the face of the new normal.

Meanwhile, the Abia government says it would revisit the construction of the long abandoned industrial village at Umukalika in Obingwa local council of the state. It said site-clearing has started to pave way for commencement of construction work on the project.

Mba Nkuma Eme, permanent secretary at the state Ministry of Industry explained that the governor has given the ministry instruction to demolish illegally built structures at the site, where they had been noticeable encroachment by the locals.

“We have started site-clearing; and the governor has given us a marching order to reclaim every part of the land that has been encroached upon by individuals,” he said.

The Umukalika Industrial park, spanning about 35 acres of land was left undeveloped by previous administrations in the state. The present administration of Okezie Ikpeazu said it is set to realize the project, in order to boost industrial development of the state, the South-east and South-south regions of Nigeria.