Nigeria’s inflation rate accelerated to a 17-year high of 20.52 percent in August 2022 from 19.64 percent recorded in July 2022, according to the latest  Consumer Price Index (CPI) report released by the National Bureau of Statistics (NBS) on Thursday.

According to the report which measured the rate of changes in prices of goods and services, the inflation rate, the highest since October 2005, was driven by a consecutive uptick in the food and core index, underpinned by increases across all classification of individual consumption by purpose (COICOP) divisions that yielded the headline index. 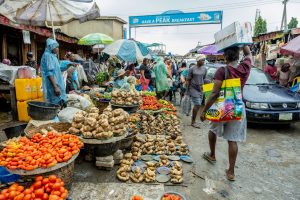 On a month-on-month basis, the headline inflation rate rose to 1.77 percent in August, compared to the 1.82 percent increase posted in the previous month.

The report further showed that the percentage change in the average CPI for the 12-months period ending August 2022 over the average of the CPI for the previous 12-month period was 3.52 percent higher than the 17.01  percent recorded in August 2021.

The national statistical agency added that the food index rose to 23.12 percent in August 2022 from 20.02 percent in the previous month of July. This was attributed to increases in prices of bread and cereals, food products, such as potatoes, yams and other tubers, oils and fats, meat, and fish.

On a month-on-month basis, the food inflation rate in August stood at 1.98 percent, which is 0.07 percent lower than 2.04 percent recorded in the previous month. The NBS attributed the decline to a reduction in the prices of some food items including tubers, garri, local rice and vegetables.

The ”All items less farm produce” or Core inflation, which excludes the prices of volatile agricultural produce, stood at 17.20 percent in August 2022, up by 0.94 percent against 16.26 percent recorded in the corresponding month of 2021.

On the state profile, Kwara State recorded the highest food inflation rate on a year-on-year basis at 30.80 percent, closely followed by Ebonyi State at 28.06 percent, and Rivers at 27.64 percent.

On the other hand, Jigawa, Zamfara and Oyo recorded the slowest rise in food inflation rates at 17.77 percent, 18.79 percent and 19.80 percent, respectively.