The Rice Processors Association of Nigeria (RIPAN) has expressed an immense displeasure over high-scale smuggling of foreign rice into the country, describing it as a siege on the existing N3.4 trillion worth of investments made by integrated, small-scale and cottage rice mill investors across the country. 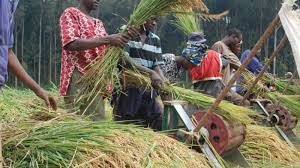 Andy Ekwelem, director-general of RIPAN, made the disclosure at the weekend at a media briefing in Abuja.

He enjoined all appropriate government agencies and stakeholders to jointly deal with the ‘crucial’ situation before millions of jobs and revenue are lost to smugglers.

Smuggling, according to Ekwelem, has remained the greatest challenge to rice farmers, processors and other stakeholders in the value chain despite efforts by the Central Bank of Nigeria (CBN) at substantially addressing the issue of insufficient funds that was beforehand a major hindrance to local rice production.

The director general said the federal government has to address this issue of smuggling to prevent the local mills from being shut down.

“Since 2011, our fight has been smuggling all the way. We’ve been engaging Customs. This problem is so disheartening. At a point, it abated as the federal government restricted border movement and then covid-19 came. After the #EndSARS protest and border reopening, it was as if there was a smuggling competition going on. Foreign rice has flooded Nigeria and we can’t even find where to display our local rice anymore,” he lamented.

He noted that there are no offtakers of locally produced rice as some mills are running at half capacity while jobs are being threatened.

He disclosed that the association had been making efforts at engaging the youths to reduce crimes and restiveness in the nation but smuggling of foreign rice has been an impediment against its efforts.

Recounting the employment capability of the local rice industry,Ekwelem said the entire rice processing industry, comprising large rice mills and cottage mills, employs over 13 million Nigerians directly. The association, he added, hosts about 3.2 million cottage mills and each employs not less than five while the integrated, small scale and cottage mills constitute a N3.4 trillion investment.

“We can’t allow smuggling of foreign rice to kill the industry. We want to conserve forex, create jobs etc. We don’t want to worsen unemployment and crime levels,” he added.

On how smuggling activities can be effectively curbed, he pleaded with the customs service to tighten security at the nation’s border. He also suggested that the federal government criminalise importation of foreign rice and those found guilty be made to face the full wrath of the law.