Oil traded near $57 a barrel as Saudi Arabia signaled it will raise security at its crude facilities after Bahrain blamed Iran for a fire on a pipeline that connects the two Arab allies.

Iran denied it was involved, according to a report by Bloomberg.

Futures were little changed in New York after falling 0.8 percent Friday. Prices still capped a fifth weekly gain last week, the longest run since October 2016. The plan to boost security was reported by Al-Arabiya television on Saturday, citing the energy ministry of Saudi Arabia, the world’s top crude exporter. The pipeline resumed pumping later in the day after a brief halt. 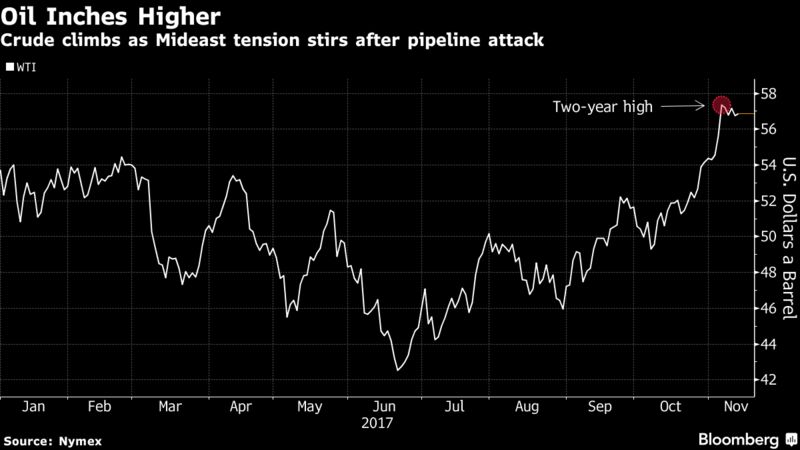 Oil has climbed about 20 percent since the start of September as global supplies tighten and speculation mounts that the Organization of Petroleum Exporting Countries will extend output curbs past the end of March. In the U.S., drillers last week increased the rig count by the most since June, according to Baker Hughes.

West Texas Intermediate for December delivery traded at $56.68 a barrel on the New York Mercantile Exchange, down 6 cents, at 10:08 a.m. London time, after climbing 0.5 percent earlier. Total volume traded was about 30 percent below the 100-day average. Prices lost 43 cents to close at $56.74 on Friday, trimming the weekly gain to 2 percent.

Brent for January settlement declined 21 cents to $63.31 a barrel on the London-based ICE Futures Europe exchange, after rising 2.3 percent last week. The global benchmark crude traded at a premium of $6.41 to January WTI.

The pipeline attack “is a dangerous Iranian escalation that aims to scare citizens and hurt the global oil industry,” Bahrain’s Foreign Minister Khalid Al-Khalifa said on Twitter. Iran responded by saying the Bahrainis “need to know that the era for lies and childish finger-pointing is over,” the Islamic Republic News Agency reported Sunday, citing a foreign ministry spokesman.