A proposal that Libya and Nigeria could have to accept limits on their crude production probably would not be enough to put OPEC’s faltering efforts to eliminate a global supply glut back on track, Bloomberg reports.

The two African nations — which were exempt from the supply curbs agreed last year due to internal strife — have added enough production in the last two months to offset Saudi Arabia’s cut. Should the pair accept a cap at their desired levels of output, OPEC and its allies led by Russia would still have to adjust their own quotas to compensate for the increase, said Nordine Ait-Laoussine, president of Geneva-based consultants Nalcosa and former energy minister of Algeria.

According to Bloomberg, Ait-Laoussine said “it’s not going to be easy just to say ‘Maybe we should just bring Nigeria and Libya into the line and it will be fine’, as “Adding those two countries without agreeing on new production ceilings for the other participants in the deal would simply be “exacerbating the problem of excess supply.”

Several OPEC nations plus non-members Russia and Oman will meet in St. Petersburg on July 24 to check up on the success of their agreement to curb output, reduce swollen global inventories and boost oil prices. Since ministers from the group last met in May, oil has fallen into a bear market as analysts and traders lose faith that the cuts are working. Market watchers including Goldman Sachs Group Inc. say deeper cuts are needed to finish the job of rebalancing the maket. 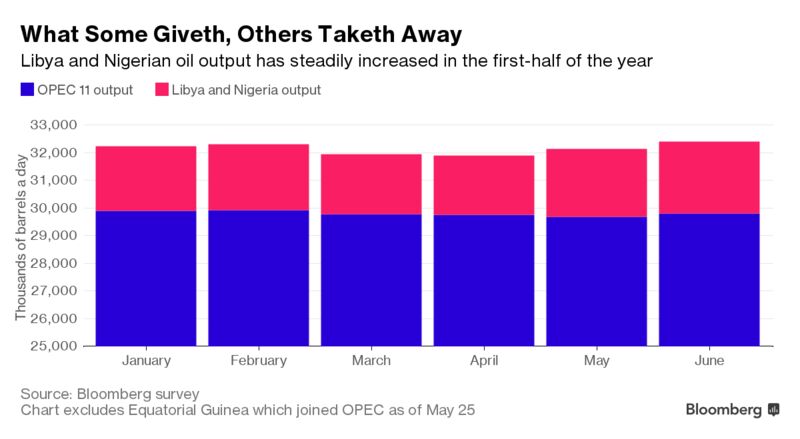 Changing quotas for existing participants in the agreement would be “opening a big can of warms,” said Thomas Pugh, commodities economist at Capital Economics. The group briefly considered and rejected the idea of deeper cuts back in May and Pugh doubts there is much political will to revise the accord now.

Crafting last year’s cuts agreement was a major undertaking. Talks started early in 2016 after prices fell to the lowest in 12 years, but a first round of talks in Doha in April ended in failure. They reconvened in Algiers in September and an accord to collectively reduce the output of 11 OPEC and 11 non-OPEC nations by as much as 1.8 million barrels a day was finally clinched in December.

With deeper cuts currently not on the agenda, according to OPEC Secretary-General Mohammad Barkindo, the group is exploring other ways the agreement could be adjusted. They have invited Libya and Nigeria to the meeting in Russia to discuss the stability of their production, Issam Almarzooq, the Kuwait oil minister said in Istanbul on July 9.

Monthly data compiled by Bloomberg show the two nations added 440,000 barrels a day of production in May and June as improved stability allowed the restart of oil fields. Saudi Arabia, OPEC’s de-facto leader, has reduced output by 460,000 this year.

Libya’s production even went above the symbolic 1 million barrels-a-day mark earlier this month, the first time in four years. However, the country remains politically volatile and oil output and exports could still be vulnerable to disruptions by armed factions and restive workers.

“OPEC and Russia have to contend with the fact is that there is output growth elsewhere diluting their efforts,” BNP Paribas SA’s Head of Commodity-Market Strategy Harry Tchilinguirian said in a note to clients. “Nigeria, Libya and U.S. shale oil feature prominently as an offset” to the cuts, he said.

“OPEC would be producing too much if the other quotas are left unchanged,” Ait-Laoussine said.