With the global plant-based meat industry experiencing continued growth despite the disruption of the Covid-19‭ ‬pandemic‭, ‬several‭ ‬emerging regions are expected to see a boom in the segment that will outlast the virus‭.‬

Plant-based meat is a broad term used to denote products that are intended to look, smell and taste like meat, but that are made – as the name suggests – entirely from plants and other non-animal products. 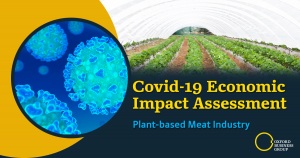 Protein-rich meat-substitutes have long been available, with tofu and tempeh being among the more well-known products in this category – but such foodstuffs do not aim to mimic actual meat.

While plant-based milk substitutes have been growing in popularity for some time and now constitute a well-developed industry, it has traditionally been considered extremely difficult to reproduce the appearance, texture and flavour of meat through plant-based products.

However, ongoing developments within the industry mean it is increasingly easy to produce plant-based products that are very similar to their animal-based counterparts.

This has given rise to a steep growth in profitability for the global sector. In the US the plant-based food industry was worth over $5bn in 2019, up 11% on the previous year, while plant-based meat sales grew 18% in the past year and 38% over the past two years.

Last year saw what many considered to be a breakthrough moment in plant-based meat’s penetration of the mainstream, when global fast food chain Burger King launched its Impossible Whopper, a plant-based alternative to one of its flagship products.

In a further indication of a significant cultural sea-change, the menu at this year’s Oscars ceremony was almost entirely plant based.

This year has also seen the space begin to fill up with new, plant-based divisions of major food players, such as Kellogg’s Incogmeato and meat giant JBS’ Planterra Foods.

An important factor behind this boost in the visibility and popularity of plant-based meat is the growing awareness of the ecological damage that meat-eating causes. The farming of livestock is a major contributor to climate change, while livestock systems – land used either for grazing or growing feed crops – currently occupy 45% of the planet’s land surface.

There is also a growing perception among consumers that plant-based meat is healthier than what some – in an attempt to reshape the conversation – now term ‘conventional’ or ‘animal-based’ meat.

Far from seeing its expansion stymied by the coronavirus pandemic, the plant-based meat industry has made significant gains in recent months, with many new customers trying its products for the first time.

According to figures released by Nielsen in October, sales of fresh plant-based meat alternatives in the US have nearly doubled in every month of this year.

One aspect of this was the fact that the availability of fresh meat was severely impacted by disruptions to regional and global supply chains. This was particularly problematic for meat compared to dry goods, which can be stockpiled comparatively easily.

Furthermore, employees of meat-processing plants usually work in very close quarters. As a result, some facilities became the first Covid-19 hotspots, while many have had to be retrofitted entirely in order to be safe enough for people to return to work, further limiting the availability of meat products.

Another factor was related to health and wellbeing. With people leading more sedentary lifestyles as a result of lockdowns, many have turned to what are perceived to be healthier eating alternatives.

Finally, it is widely believed that the novel coronavirus was transmitted to humans from animals – albeit more exotic ones than most people have access to. Nevertheless, this has increased scrutiny regarding the possible risks of eating animal-sourced food.

Developing economies have also seen a spike in consumer interest in plant-based meat, and this is tipped to continue.

The Asia-Pacific region – and China in particular – is expected to continue growing in terms of both production and consumption.

In 2016 the Chinese government announced that it aims to halve meat consumption among the population by 2030, for both ecological and public health reasons – an initiative that is creating a lot of space in the market for alternatives.

According to US-based consultancy firm FutureBridge, while 43 new meat alternative products were launched in China in 2019, this figure rose to 63 in the first half of this year alone.

Indeed, a crop of local start-ups are rivalling foreign entrants such as US-based Impossible Foods to corner a booming market. Beijing-based Zhenmeat is even working on 3D-printed bones to give their meat alternatives an extra level of authenticity.

The Middle East and African meat alternative space is also growing, with market research company Triton predicting a compound annual growth rate of 9.8% between 2019 and 2027. The UAE, in particular, is seeing growth: Veganity, which claims to be the restaurant with the world’s most extensive plant-based menu, opened in Dubai last year.

Another region that is widely considered to be ripe for a sustained boom in meat alternatives is Latin America – despite its renowned love for red meat, from Mexican tacos de pastor to Argentine ribeye steaks.

Vegetarianism is on the rise in the region, as is organic farming. In Brazil, for example, between 2012 and 2018, the number of self-declared vegetarians doubled, while organic farming is increasingly popular.

A recent report released by the International Labour Organisation and the Inter-American Development Bank argues that a broad-based adoption of sustainably produced, plant-based foods could provide a major fillip to the Latin American economy.

The report notes that – although a reduction in established, animal-product-oriented diets could provoke an estimated 4.3m job losses – a shift to plant-based foods could generate 19m new jobs.

Considering that plant-based food requires less land and water and fewer inputs than animal-based food, such a dietary shift should reduce biodiversity loss and land degradation, as well as improve food security.

As such, while it will be hard to change mainstream consumer patterns in the region, a trend towards plant-based alternatives could spark some immediate and broad-based benefits for the environment and public health.

These developments point towards a promising future for plant-based meat, particularly if the industry can capitalise on the growing interest it has experienced during the pandemic.

Nigerian stocks down 1.2% on sell-offs in big cap banks