The Presidency has confirmed that President Muhammadu Buhari laid off some aides to Vice-President Yemi Osinbajo as part of an ongoing overhauling of the seat of government. 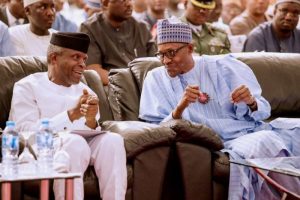 “The exercise, which has been ordered by the President, is to streamline decision-making, cut down multiple authorities and reduce the cost of administration.

“It is also an appropriate response to the general perception that the Presidency has an oversized and bloated workforce which acts as a drag on efficiency.

“As may have been noticed by discerning members of the public, a number of political appointees among the few that served in the office of the President were not returned for the second term.

“The office of the Vice President, His Excellency Yemi Osinbajo has, in compliance with the directive of the President, equally been shed of a number of such appointees,” a State House statement by Buhari’s senior special assistant on media and publicity. Garba Shehu, said on Friday.