President Muhammadu Buhari is expected to commission the first phase 13 kilometers of the Blue Line corridor project  connecting Marina to Mile 2 in Lagos. When fully completed, the second and final phase will see passengers traveling to and from Okokomaiko to Marina covering a total of 27 kilometers.

The event will take place this week Tuesday at the Marina train station, Outer Marina area of the state. 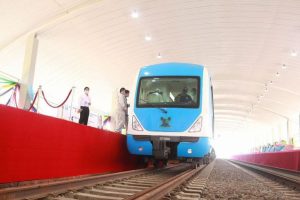 According to a letter sighted by our reporter, it says, “This special event is proposed to invite President Muhammad Buhari GCFR, governor Babajide Sanwo-Olu of Lagos state, minister of transportation Mu’azu Sambo and the Chinese ambassador to Nigeria, Cui Jianchun. We believe that your presence will give us more encouragement and enthusiasm to complete this event successfully”.

The elevated train network will transit between Marina and Mile-2 axis of the state as part of measures to ease road congestion.

The rail has five stations at Mile 2, Suru-Alaba, Orile Iganmu, National Theatre and Marina. The project is being handled by the state’s Metropolitan Area Transport Authority (LAMATA).

However, in 2008, the agency chose to focus on a seven-line network codenamed Red, Blue, Green, Yellow, Purple, Brown and Orange lines.

The project was flagged off in 1999 during the administration of the then governor, Bola Tinubu.