The Gulf state of Qatar said Friday it would invest €10 billion (8.9 billion pounds) to strengthen its ties with Germany over the next five years, including the possible creation of a liquefied natural gas (LNG) terminal. 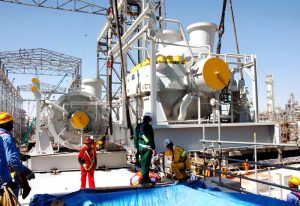 The head of the Qatar Investment Authority (QIA), which ranks among the top 10 sovereign funds in the world, said the fresh funds would facilitate additional investments in the German financial sector, as well as in promising developments in information technology, artificial intelligence and healthcare.

The latest investment pledge comes on top of €25 billion Qatar has already invested in key German companies such as Volkswagen AG, Siemens AG, Deutsche Bank and others.

“To express our trust in the strength of the German economy and the importance of investing in it, I announce the intention of Qatar to pump investments that amount to 10 billion euros into the German economy in the next five years,” al-Thani said.

He said the overall volume of German-Qatari trade had dipped slightly in 2017 after doubling to around €2.8 billion euros, but he expected further growth in coming years.

Yousuf Mohammed al-Jaidah, chief executive of the Qatar Financial Centre, said Qatar was offering incentives to foreign companies as it tried to triple the current level of foreign direct investment in the country.

Qatar is hosting the 2022 World Cup, which offers opportunities for investment in construction, engineering and logistics, officials said. Qatari Economy Minister Ahmed Bin Jassim din Mohammed al-Thani said Qatar could also be a useful hub for the reconstruction of Iraq and other war-torn regions.

“From my point of view, the energy sector in particular offers considerable potential to expand our economic ties,” Merkel told the emir and other conference participants.

She said Germany was already linked with LNG terminals in the Netherlands, Belgium and Poland, but her government was working to expand the LNG network within Germany, and German companies were working toward a potential local LNG terminal.

Qatar’s energy minister Mohammed al-Sada on Thursday threw his support behind the possible cooperation of Qatar Petroleum, the world’s top supplier of LNG, in the project.

On Wednesday Qatar Petroleum said it was in talks with Germany’s RWE (RWEG.DE) and rival Uniper (UN01.DE) about the potential LNG terminal.

Christian Sewing, chief executive of Deutsche Bank, underscored close ties with Qatar – which holds a 6.1 percent stake in the German bank – had helped give the bank room to restructure and “do its homework.”