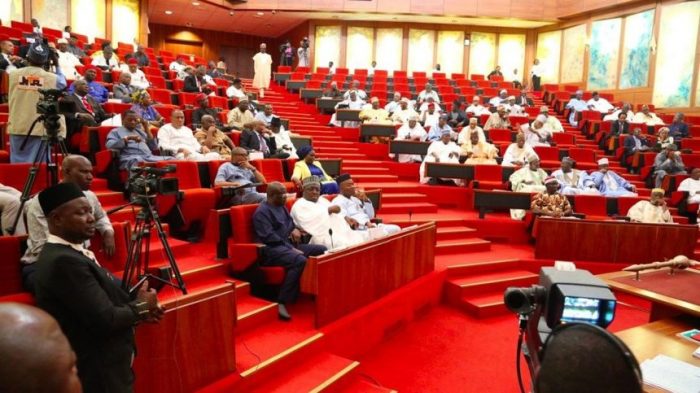 A statement by Ezrel Tabiowo, special assistant (press) to Senate President Ahmed Lawan, indicated the move was a demonstration of National Assembly upper chamber’s commitment to partner the executive arm of government in boosting the nation’s revenue collections through new fiscal regime measures.
President Muhammadu Buhari  had earlier today sent a letter to the Senate, seeking the amendment of the Act.
The bill was passed by the upper chamber after consideration of the report of the Joint Committees on Petroleum (Upstream), Gas and Finance.
With the passage of the bill, it is estimated that Nigeria stands to benefit about N400 billion yearly being revenue due to the Federal Government from International Oil Companies (IOCs) operating in the country.
The Senate, during the clause-by-clause consideration of the committee’s report, however amended clause 17 of the Act, which recommended 10 years for a future review of the law.
Deputy Senate President Ovie Omo-Agege, during consideration of the report, demanded explanation from the Joint Committee as to why the timeline for review of Production Sharing Contracts was amended from 5 years to 10 years.
In his response, Chairman of the Committee, Senator Albert Bassey Akpan, explained that the Nigerian National Petroleum Corporation (NNPC) and International Oil Companies bemoaned the five-year period which they said was insufficient to take certain final investment decisions.
“It takes about five years for an investor to take a Final Investment Decision (FID) on oil investment. So, the NNPC and others are saying for you to review the law, you must give them a stable law; something they can project on”, Akpan said.
Some lawmakers including Senators Danjuma Goje (APC, Gombe Central) and Jibrin Barau (APC, Kano North), who were not swayed by Senator Akpan’s explanation, insisted on the retention of the existing five-year periodic timeline provided in the Act.
Senator Ibikunle Amosun (APC, Ogun Central), however prevailed on his colleagues and moved a motion for an amendment of clause 17 to specify eight years as the timeline for the review of the Production sharing Contracts.
The motion was seconded by Senator Kabiru Gaya (APC, Kano South) and thereafter adopted by the upper chamber when put to a voice vote by Senate President Ahmad Lawan.
In his remarks, Ahmad Lawan. said the National Assembly made history with the passage of the Bill for an amendment of Production sharing Contracts Act.
While, commending President Muhammadu Buhari for his commitment towards ensuring the amendment of the Act, he stressed that Nigeria stands to benefit N1.5 billion as a result of the amendment.
He said: “We have done what could not be done since 2003 to date. Today marks a milestone in the history of the Senate, and particularly the National Assembly.
“With the passage of this bill, Nigeria will gain at least $1.5 billion in 2020 as a result of this amendment. The Senate will do more.
“I must commend President Buhari, who mentioned the need to amend this bill in his speech when he presented the 2020 budget to the National Assembly last week, and of course, we also received an executive communication from him.”
Lawan emphasised the amendment of the Production Sharing Contract Act will create a level playing ground for the government and International Oil Companies doing business in Nigeria.
He said: “For the IOCs doing business in Nigeria, the amendment will not in anyway discourage investment. We expect that they will continue to do business in Nigeria.
“When we legislate at the National Assembly, we will always be mindful of the need to have a competitive environment.
“When we work on the Petroleum Industry Bill, maybe in January, we will ensure that it is a win-win situation for Nigerians and those doing business in the oil and gas industry”, Lawan added.
Earlier, the Senate President read an executive communication from President Muhammadu Buhari requesting the amendment of the Production Sharing Contracts Act.
The letter dated 10th October, 2019, reads: “Pursuant to Section 58 of the Constitution of the Federal Republic of Nigeria 1999 (as amended),  I hereby present the Deep Offshore and Inland Basin Production Sharing Contracts (Amendment)  Bill,  2019 for consideration and passage into law by the Senate.
“This Bill seeks to reflect the current realities in the oil and gas sector, as well as to secure increased revenue for the Federal government to fund projected expenditure in the 2020 and subsequent budgets.
“While I trust that this bill will be expeditiously and favourably considered by the National Assembly, please accept, Distinguished Senate President, the assurances of my highest consideration.”