The administration of Governor Aminu Waziri Tambuwal in Sokoto has scaled up its rural areas transformation initiative that would translate
to the construction of 500 kilometers brand new rural roads across the
state.

The administration is leveraging on the $500 million facility made available to Nigerian Government by the World Bank (WB) in partnership with French Development Agency (FDA), and Africa Development Bank (ADB) to execute the developmental initiative.

And as a demonstration of his irrevocable commitment to the project, the governor had approved the sum of N1.1 billion for immediate release, as
the state government counterpart fund for the multi-billion naira road
project. 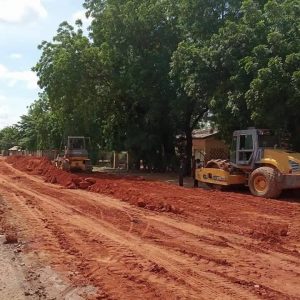 The road project which is already generating excitement in the state,
according to analysts, is a beneficiary of a wise buy–in by the Tambuwal
administration into an agreement entered into by the Federal Government
and the World Bank, tagged ‘Rural Access Mobility Project (RAMP), under
the Bank 2020`s project in Nigeria.

The execution of the RAMP, which enters its second phase, tagged ‘Rural
Access and Agricultural Marketing Project (RAAMP)’ is geared at
achieving effective and sustainable development in rural communities
across the 23 Local Government Areas (LGAs) in the State, where the
project is being executed.

Fact check conducted by business a.m. indicates apart from Sokoto State,
where the project is being executed, the RAAMP initiative is also being
executed in 17 other states across the country.

An agreement towards the actualization of the road development project,
has been signed between the State Government and officials of the World
Bank, at the Sokoto State Government.

Speaking on the sidelines of the signing ceremony, Malami Tambuwal, state coordinator of the project, who confirmed the state government’s
involvement in it, disclosed that the required fund have been released.

Tambuwal further revealed that the next step remaining for the project to fully kick –off, was the arrival of a team of experts from the World Bank, who are expected to visit the state to finalise other details related to the signed agreement.

According to him, in readiness for the kick -off of the project, the state government and World Bank consultants have embarked on a study for the identification of the rural roads to build in the 23 local government areas of the state.

Briefs on the RAAMP obtained by business.a.m indicates that one of the
driving reasons why Governor Tambuwal is vigorously executing this project was because of the long term goal it has in alleviating the suffering of dwellers in Rural Communities.

The project was designed with the intention of providing access roads
linking localities and farmlands, as well as create access from Farmlands to Agro-Processing centres, and to the Market Areas.

The brief shows that the Tambuwal’s administration has recorded tremendous progress in the move to fully actualize the road project, some of the steps put in place to this effect, was the composition of a functional ‘State Project Implementation Unit (SPIU), provided with a well –furnished accommodation.

The state governor has also approved the release of designated staff deployed to the SPIU, from the various Ministries, Department and Agencies (MDAS), just as 3 brand new Toyota 4X4 Hilux and one 18 Seater Bus have been purchased for the operation of the project.

In the same vein, the state government has also provided a 50KVA Stand by Generator for the SPIU, as well as several laptop computers, for the
smooth running of the office, just as an Agro-Logistic study has been conducted and Agro logistic intervention areas under the project has been identified.