By Kenneth Afor With agency reports

The United States’ (U.S) major agricultural produce, soybean export to China in recent times this year met the United States Department of Agriculture (USDA) projections as the commodity got to a $9 mark for investors on Tuesday. 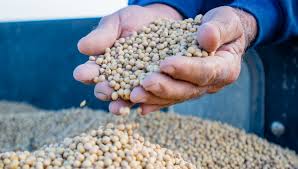 The commodity futures are currently trading at their best levels for the two months in a row due to the increasing demand of the commodity by the Chinese.

Analysts said that the commodity which had a rough time in the summer was able to withstand global demands especially from its trading counterpart, China despite the protracted trading dispute with the U.S. which started this year.

Investors were amused by the projections released by the USDA for soybean inventories.

However, the USDA, domestic soybean stockpiles came in at 913 million bushels, down by about 70 million bushels from the average. But supplies still remain 108 percent high as at this time last year due to delay in shipments to China and a delay in harvesting.

Expectations for investors are high ahead of next week’s US-China trade negotiations in Washington, buyers in Beijing purchased roughly 600,000 tonnes of Americans soybeans for shipment from November to January. This is part of the tariff-free window that the Chinese government extended to importers last week, giving room to up to two million tonnes of the commodity imported.

According to reports, China has met its 2019 shortfall of soybean imports after the arrival 10 cargoes containing 60,000 tonnes of soybeans sold to private and state-owned enterprises (SOEs) while leftovers will be kept in its reserves.

Wang Yi, China’s state councillor and foreign minister affirms that both the U.S. and China need to demonstrate some level of goodwill which he said China has done over the last 18 months.

As part of China’s commitment, it has acquired over 19 million tonnes of soybeans a little bit to close up with its demand.