•   Knorr is manufactured by Unilever (formerly Cadbury Nigeria). The brand has continued to retain its position as a leader in the food seasoning market in Nigeria. Maggi is from the stables of Nestlѐ Foods. Maggi has created a niche as a household name in Nigeria, such that its brand name is commonly used as the generic name for all seasoning cubes in the country. 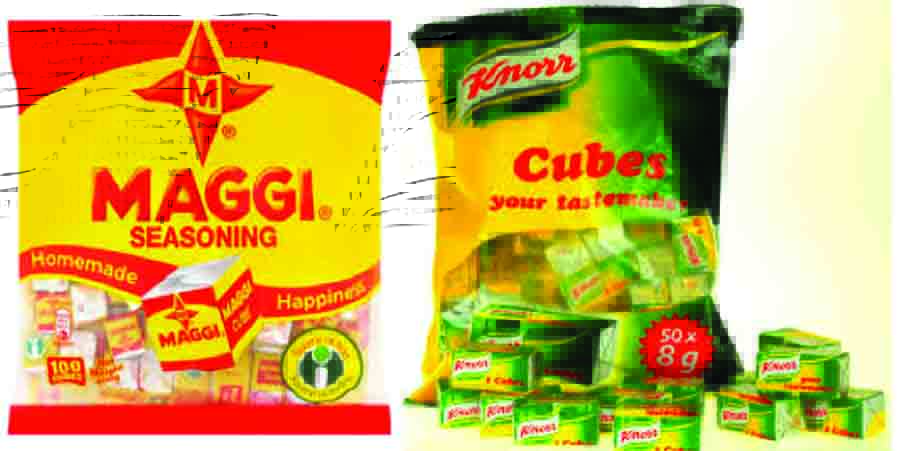 •   Without a doubt, Maggi has more variants than Knorr. Specifically, Maggi has the most variants (up to 10) of all bouillon cubes in Nigeria. These include Chicken, Crayfish, Onion Epice, Naija Pot, Star, Mutton, Kari, Safsafal, Nokoss, and Golden Beef. And while Knorr may have other varieties, the known variants in stores and markets are Knorr Chicken Cubes and Knorr Classic Cubes. Knorr seasoning mixes (in powder form) are not easy to find in retail stores.

•   In terms of taste, more customers believe that Knorr has a milder, less salty taste than Maggi. A good number of people said Knorr adds a unique taste to every meal. Consumer’s opinions across board, reveals that approximately 56% people think Maggi has high salt, iodine, and sodium content.

•   Knorr is currently the most expensive seasoning brand in Nigeria, selling at a retail price of N530-N550 for its 400 g pack of 8 grams each, 50 stock cubes, being the food seasoning product with the biggest net weight in Nigeria. There are no smaller variations. It therefore has a market positioning that caters to people who do not mind spending more on seasoning. Maggi’s 400 g pack of 4 grams each, 100 stock cubes sells at N420. It also has a 100 g pack of 4 grams/cube (25 cubes) variation which sells at N100, making it a more pocket-friendly option.

•   This research found out that more restaurants and eateries use Knorr, while Maggi is used in many homes. Knorr Chicken Cubes are best for stews and continental dishes as confirmed by chefs and restaurant owners who said they use it to prepare dishes like Jambalaya rice, Seafood fried rice, and Spaghetti cabonara; Knorr Classic Cubes are commonly used to prepare all kinds of African soups. According to one hotelier, her staff may miscalculate the amount of salt to add using Maggi star, and to avoid this she uses Knorr. Maggi has captured the hearts of many people and homes, resulting from the way the brand has positioned itself over the years, through cooking shows and other marketing means. Combined responses from many women revealed the following on how best to use Maggi’s products: Maggi Chicken is used for seasoning of stew, meat, and many other foods. Maggi Crayfish is best for seasoning seafoods. Maggi Onion Epice complements onion and other natural spices in meals. Maggi Star is an all-rounder variant for stews, soups, and other homemade meals. It may interest you to know that Maggi Crayfish is currently the favourite of all the variants of Maggi.

•   A customer said she prefers to use Knorr because it is easier to loosen the bouillon cubes package conveniently, adding that it is not so easy unwrapping Maggi cubes package due to the material it is made with.

•   Both Maggi and Knorr seasoning contains sodium, iron, and iodine. Iron is particularly important for blood formation. The nutritional information below might be of interest to you.

•   While the sugar in the makeup of Maggi has been said to be a good source of vitamin A, specifically tackling night blindness in adults and preventable blindness in children. Knorr seasoning cubes are gluten-free, low in cholesterol and fats and free of artificial preservatives.

•   An ingredient in Knorr, ferric pyrophosphate, is associated with dizziness and weakness when consumed in certain foods. The salty nature of Maggi has somewhat affected Maggi’s preference by certain consumers who complain that they have to be scrupulous about the amount of salt they add to their cooking. If not the consumer risks several health challenges arising from too much iodine and sodium. Too much iodine could lead to fatigue, cold intolerance, obesity, and memory problems, while too much sodium could lead to high blood pressure and renal stones, according to the National Library of Medicine (NLM).

•   Without a doubt, Knorr and Maggi seasoning cubes are leading food seasoning brands in the Nigerian market. Popularity and high revenue from sales show that both are delivering on their brand promise. Hence, the king of food seasoning can be determined in the taste each brings to meals.