Mobile World Congress (MWC) starts on February 26 in Barcelona and runs through to March 1.

The MWC, the biggest mobile industry trade show in the world, is due to kick off in Barcelona in just a few days’ time. So, what are the key trends to watch out for at this year’s show?

5G and its associated use cases are expected to take centre stage in Barcelona, while discussions will also turn to the potential of artificial intelligence (AI) to overhaul network management and customer service.

5G will move from concept to planning stage

5G technology has the potential to revolutionise networks, enabling use cases across multiple sectors. At this year’s MWC conference, 5G will be a bigger focus than ever before, especially given that the end of 2017 saw standards body the 3rd Generation Partnership Project (3GPP)’s Release 15 specifications for non-standalone 5G finalised.

Kester Mann, Analyst at CCS Insight explains: “The first 5G standard has been confirmed and the second iteration is due in June, so we will see people talking more authoritatively about the technology: We will start to get some firm plans.”

This could see mobile operators presenting the results that are informing their future deployments, says Li-Ke Huang, research and technology director at Cobham Wireless. “This year, people will come to MWC with real data, when last year they came with a vision.”

John Lenns, VP Product Management at Oracle Communications, agrees, saying: “MWC will see a focus on what needs to happen from an infrastructure perspective to take 5G from being an exciting prospect to a functioning part of the network.”

As part of this, issues to overcome in 5G will include the operational challenges of rolling out networks and services. It will also start to become clear how the technology will be managed in practice.

“We are getting close to understanding what 5G means to the telco industry,” says Anders Lindblad, Accenture’s Communications and Media Industry Lead for Europe. “So, the talk will be about for example, what edge computing and low latency in 5G can do and how this translates into a business model.

“I wouldn’t be surprised if at MWC, we discuss technology platforms and futuristic ideas including business models that can enable this quite difficult investment.” 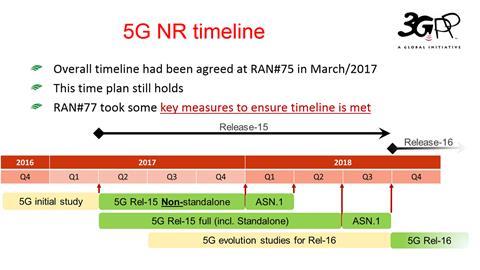 5G capabilities in broadcast will start to become clear

MWC kicks off just after the 2018 Winter Olympics in PyeongChang, South Korea, comes to an end. It is at this sporting event that 5G has seen its worldwide debut with mobile operator KT offering a 5G autonomous bus as well as virtual reality views of the action. Therefore, during MWC, according to Mann: “We might see some demonstrations around the consumer experience of 5G – such as augmented and virtual reality (VR).”

Of course, the media and broadcast industry will benefit from this capability. And more broadly, 5G will help to meet demand for video delivery, says Nick Moreno, Director of Strategy, Satellite and Media, at Arqiva. “5G offers the ability to deliver video at scale and allows VR capable streams, which isn’t feasible at the moment using other cellular technology.”

Partnerships and integration
As mobile technology reaches across industries, partnerships are more key than ever. At this year’s MWC, announcements are likely to centre on content and similar services.

For example, watch out for content deal announcements from the personal assistants offered by operators, such as Orange Djingo. Meanwhile, although some of the operators’ personal assistants were launched to take on the likes of the Amazon Echo and Google Home, experts predict there will soon be integration.

”This year, it is possible that integration with existing ones such as Amazon’s Alexa and the Google Assistant will come as well. They will be integrated into back end systems for personalised solutions. Operators launched their vision at last year’s MWC and in 2018, we will see the reality – including integration with content.”

But the mobile operators could also face competition from Google, which is understood to be using MWC 2018 as a platform to showcase its own Google Assistant.

Artificial intelligence (AI) offers two major use cases in telecoms, both of which will be demonstrated at this year’s MWC. Firstly, the technology can improve the way operators manage and plan their networks, helping to predict demand and inform mobile tariffs.

At the same time, AI can be used for customer service and personalisation using chatbots. “During MWC, AI from a mobile operator perspective will be everywhere,” says Mann.

At the centre of this trend is the vast amounts of information being produced on a daily basis. According to Youngerwood, operators “are sitting on a goldmine of data”, which they can use for insight and interaction, predicting churn risk to help retain customers.

The result is AI technology able to monitor trends and analyse data before customers even get on the phone to complain. For example, he says: “If a customer has had problems with their pay TV box, and also experienced four dropped calls, this data can be used to predict that the churn risk is higher. This gives contact centres the chance to follow up.”

Youngerwood says this type of predictive analytics – which is already used by providers such as Netflix to recommend TV shows – could see operators offering a discount to customers likely to churn.

The move towards AI will also inform operators’ future strategies, says James Gray, Director at Graystone Strategy: “We will hear a lot about AI in customer service and experience. This is an area where sifting through big data and getting your segmentation right will be invaluable in creating a multi-play strategy.”

Developments in internet of things (IoT)

The billions of devices connected to the internet comprising the IoT will feature heavily at this year’s MWC. According to Mann, the conference will see discussion around connectivity and the use cases enabled by 5G such as autonomous vehicles and robotics.

Wally Swain, Analyst at 451 Research predicts: “There will be lots of discussions about IoT, especially 5G applications.”

However, rather than showcasing the consumer side, MWC is focused on industrial use cases for IoT, says Mann. Therefore, he predicts: “We will hear about the technology specifically designed for IoT, NarrowBand IoT (NBIoT) and LTE-M – and we may gain some insights into use cases.”

In addition, Lindblad points out, IoT will create challenges to be discussed. He explains: “If we have 25 billion devices in use, it is going be cost prohibitive to gain insight and value out of the data unless we have a new way of managing it.”

Of course, the MWC show will also include some big smartphone launches. This year’s event could see some interesting features added to mobile devices, with virtual reality, security and biometrics thought to be appearing on smartphones launching at MWC. Watch out for the Samsung Galaxy S9 and Galaxy S9 Plus – which features a dual camera – as well as smartphones from the likes of Nokia, Motorola, Sony, and Huawei.

With the Chairman of the US Federal Communications Commission, Ajit Pai speaking at this year’s MWC, net neutrality will be a key topic of discussion. Indeed, the Monday evening keynote session at the show will be a hot ticket in the wake of his controversial policy to overturn previous regulation in the US, Mann says.