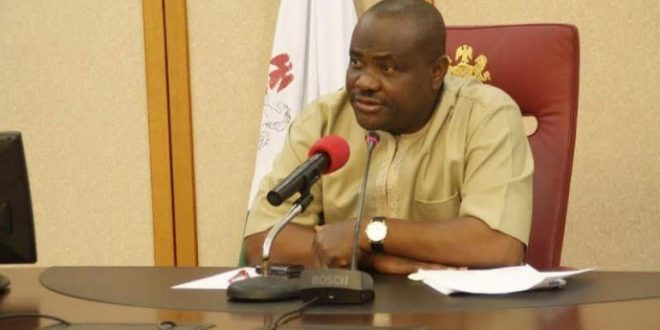 Governor Nyesom Wike of Rivers State, has released the 20 dockworkers arrested and detained for allegedly flouting the state’s rules on COVID-19.

The dockworkers were said to have reported for work at the BUA Terminals in Rivers Port, Port Harcourt during the state enforced lockdown of the city as part of measures to contain the dreaded coronavirus in the state.

Following the arrest and detention of the dockworkers, the Maritime Workers Union of Nigeria (MWUN) had threatened to go on strike and shut down port operations in the country if the governor failed to release the port workers within two days beginning on Monday, and expiring on Wednesday.

Governor Wike appeared to have bowed to the pressure and threat from the union as he released the workers on Wednesday.

The federal government of Nigeria had enlisted port operations as essential services, as the country leaves seaports open to receive aids and essential goods, such as foods and medical supplies.

Adewale Adeyanju, president general of MWUN, who spoke with newsmen on Wednesday in Lagos, frowned at the arrest of the workers embarking on their legitimate means of livelihood, as he called on the Rivers State Government to drop all charges levelled against them.

Adeyanju also called on the Wike’s led government to release the union staff buses that was confiscated during the arrest, saying its the only means of transportation for the dockworkers to and fro the Port Harcourt seaport due to the movement restrictions during the coronavirus pandemic.

He added the Commissioner of Police, Rivers State Command had a robust interaction members of the union, noting that “respectful stakeholders in the industry and from our affiliate labour congress have intervened for them to regain their freedom.“

“My major concern here is that the government should drop all the charges levelled against our members because they are not criminals and that is our stand,” Adeyanju said, insisting that “They did not commit any offence neither have they violated any restrictions before they were detained.”

He said, “As a responsible union we applied wisdom to whatever we are doing most especially during the coronavirus pandemic era.”