With the rise of green energy and increasing use of lower carbon alternatives, including natural gas, coal production has been declining
for several years. According to BP’s annual statistical review of world energy, 2016 saw the biggest drop in coal production on record, a
huge fall of 6.2%.

Much of this decline is being attributed to China and the US, both major coal consumers, who have turned to renewable energy.

The UK, which has also significantly reined in its reliance on the fuel in recent years, has managed its first day in 140 years without burning any coal to generate power.

China, the world’s biggest energy consumer and by far the biggest coal user, cut back on its use by 26 million tonnes of oil equivalent, or MTOE, over the course of 2016. The amount it mined fell by a record 140 MTOE.

The numbers are linked to a series of measures the country took at the beginning of 2016 to reduce excess domestic coal capacity as well as boost efficiency in the remaining mines. The impact was dramatic: coal production plummeted while prices rose sharply.

The Global Energy Architecture Performance Index Report 2017 by the World Economic Forum places China in 95th place – it lags other global superpowers because of its high level of energy intensity and CO2 emissions.

All this has spilled over into the global coal market, with prices rising more widely and depressing coal demand further. 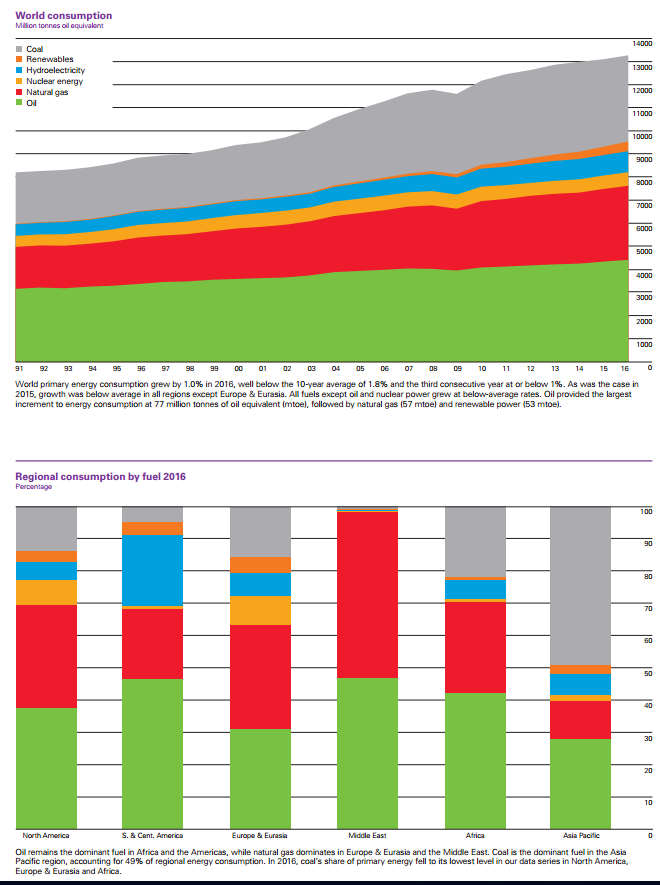 Although they still make up a small percentage of our global energy market overall, the use of renewables continues to climb. Renewable
power (excluding hydro) saw its largest climb on record – 14.1%, or 53 MTOE.

Wind made up more than half of this growth. Solar accounted for a third. China is now the largest single renewables producer, overtaking the US.

This all means that carbon emissions were essentially flat year-on-year. This is the third year in which there has been little or no growth – a sharp turn-around from the previous decade when emissions climbed by almost 2.5% a year. China’s carbon emissions have actually fallen in the last couple of years, having grown by 75% in the previous 10 years.

The key question, BP’s Group Chief Economist Spencer Dale notes, particularly as America withdraws from the Paris climate accord, is
whether the past three years are a decisive break from the past or merely a result of cyclical factors.