The at least 11-year-old ongoing road and rail Lagos-Badagry expressway project started by then governor Babatunde Fashola, current minister of works and housing, is to get a bite for a renewed push from a N137.3 billion bond the government of Babajide Sanwo-Olu has signed. 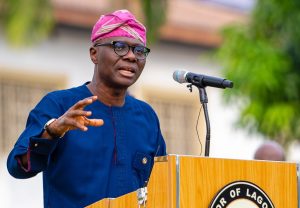 The ambitious project, which Fashola conceived as governor in 2008, was expected to have been completed by Fashola as a landmark signature project as he rounded off his two-term governorship, but it was soon buffeted by controversies that have seen it roll into the infamous realm of an elephant project, dashing all expectations from the largely middle and lower class of the population that would have benefitted from its completion.

Many have accused the governments of Fashola, Akinwunmi Ambode and now Sanwo-Olu, of not giving the required attention to the project, that they preferred giving attention to the more affluent parts of the state, especially Lagos Island and the Lagos-Lekki-Epe corridor. But it is now expected that with the Lagos-Badagry project listed to benefit from the N137.3 billion bond, the work would be speeded up to open up that corridor the same way the Lekki-Epe expressway has opened up that part of Lagos State.
The state had approached the bond market in search of funds to upgrade infrastructure. It has been a cleverer user of the debt capital market among Nigeria’s subnationals, for this purpose for years.
In this latest move Governor Babajide Sanwo-Olu, a key player when Babatunde Fashola’s government played strong in the debt capital market, signed the dotted lines for the N137.3 billion bond, which he wants to use to reduce the infrastructural deficit in Nigeria’s most populous city and commercial capital.
At the State House, Alausa, Ikeja, where the signing took place, Governor Sanwo-olu assured that the bond, signed with Chapel Hill Denham as the major issuing house, would be used for the purposes of developing infrastructure projects across the state  and also impacting positively on the well being of all residents in the state.
The governor further disclosed that the major infrastructural projects that would be executed with the bond issuance include, the Lagos Badagry expressway, the ten kilometre regional roads in Lekki, Eleko junction to Epe six kilometre road, drainage and flooding issues, as well as execution of projects in the health sector.
In his remarks, Rabiu Olowo, Lagos State finance commissioner, noted that the state sought for N125,000,000,000 bond but got over subscription which signifies the trust and confidence of the investing communities in the present administration.
He also expressed confidence that the ten year bond from 2021 to 2031 pegged at an interest rate of 13 percent would save the state government from engaging in wasteful projects.
Kemi Awodehin, representative of the investing communities, thanked the state government for trusting them to finance key projects in the state for the benefit of the over 22 million Lagos residents.
The event, adjudged to be the largest single bond by a sub-national in the domestic markets, was attended by all members of the state cabinet, representatives of issuing houses, trustees, rating agents, stock brokers, receiving banks and solicitors to the state government and issuers among others.
Businessamlive Website Stats