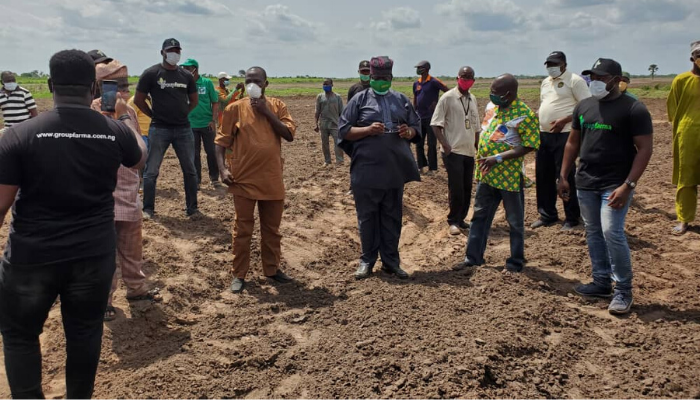 Prince Dapo Abiodun, Ogun State governor, has lauded an agrictech company in the state, GroupFarm for cultivating fresh 2,500 hectares of premium rice in the state.

During a recent visit to the project at one of the locations at Eggua Yewa North, Ogun State, Abiodun, who was represented by Adeola Odedina, the commissioner of agriculture, also restated support of agriculture in the state.

He stressed that GroupFarma was setting a good example that would both create values for local farmers as well as promote food security in the country.

According Niyi Ogungbade, chief executive officer of Timesellers Limited, owner of GroupFarma, the new project has been targeted at meeting local demand of the staple after federal government’s rigorous efforts to ban importation of rice into the country.

He added said in an effort to guarantee food security in the country, Groupfarma had identified arable land for the cultivation of rice in various locations in Ogun State.

Speaking on the visit to the farm by the Ogun State government, he said: “The visit was met with smiles as everyone present was very impressed with the efforts and plans of Groupfarma as regards agriculture in the state.

“Local farmers who have also been integrated into the project were also present to express their excitement and readiness to profitably partner with Groupfarma.”

He said to empower and improve the quality of lives of farmers; the rice farm would be driven by the local farmers.

“During the official visit to the farm, Odedina expressed his joy at the ongoing project and stated that the State Government will continue to support agric projects such as the one Groupfarma is executing,” he said.

He further explained that Groupfarma is one of the leading agritech startup companies in Nigeria for its recognized and proven commitment that recently earned it recognition as the Number One Agritech Company in Nigeria.

He said the company has been providing agritech solutions and ensuring that local farmers and financial partners have a profitable handshake.

Meanwhile, Ogungbade commended the Ogun State Government for demonstrating unwavering support for agriculture in the state. “No wonder Groupfarma finds Ogun State as a suitable location for its rice project,” he said.