By Charles Abuede & Ben Eguzozie
Ameenah Gurib-Fakim, the former President of Mauritius and Laureate of the 2007 L’Oréal-UNESCO Prize for Women in Science, has said Africa must close its science and technology gap to take full advantage of the African Continental Free Trade Area (AfCFTA). 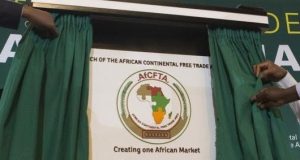 Gurib-Fakim, who delivered a trenchant keynote address at the fifth annual Babacar Ndiaye Lecture on “the importance of science, technology and innovation in the transformation of African economies,” organised by the African Export-Import Bank (Afreximbank), laid bare a raft of statistics which showed that the continent is lagging behind the rest of the world in science, technology, and innovation (STI).

She revealed that Africa is responsible for only 2 percent of the world’s research output and 1 percent of research spending as only 0.1 percent of all patent applications are registered in Africa as against 65 percent reported in Asia and 25 percent in North America.