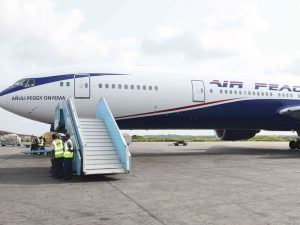 The development saw the state government and indigenes of Benue come out in a pool of excitement as it marks the only airline with commercial flights into Makurdi, Benue State at the moment.

The state governor, Samuel Ortom, was available to welcome the inaugural flight which departed the Murtala Muhammed Airport, Lagos by 7:00 a.m. through the Nnamdi Azikiwe International Airport (NAIA), Abuja to Makurdi.

By 9:15 am, the inaugural flight P47440 arrived Makurdi Airport to a ceremonial water occasion by officials of the Aerodrome Rescue and Firefighting unit of the Federal Airports Authority of Nigeria (FAAN).

Representing the chairman of the airline at the inaugural flight ceremony, Ayodeji Adeyemi, ground operations manager, Air Peace, described the development as a historic feat as no airline currently operates flights from Lagos and Abuja to Makurdi.

He said the decision to operate Markurdi was a result of the persisting original vision to interconnect various cities across Nigeria, whilst also fostering unity and promoting impactful economic relations.

The Markurdi route, according to him, has been on popular demand. “As a socially sensitive and responsive airline, we’re constantly reviewing our route network vis-à-vis public needs while considering strategic ways of expanding it to provide immense value to Nigerians.”

Air Peace promised that the new route “will be optimally serviced, and Nigerians will benefit exceedingly,” Adeyemi stressed.

Furthermore, Adeyemi stated that the new opportunity would create jobs for indigenes of Benue State as its primary purpose of creation. He, however, solicited the support and cooperation of all relevant stakeholders in order for the airline to keep accomplishing the lofty feats.

Commending the airline’s management for the opportunity to have commercial air transport to Benue State, Governor Ortom said the development would boost the state’s economy by opening it for foreign direct investment thereby, eliminating the fear of travelling by road.

“I particularly thank the Air Peace chairman for accepting this partnership and we are hopeful this would be fruitful. It will also ease the travel burden of our people,” he said.

In addition, George Akume, former governor and now a senator, who boarded the flight back to Abuja, noted that there have been several unsuccessful attempts in the past to ensure regular flights into Makurdi.

Akume and Comfort Ogbuagwu, the airport manager, were also available at the event to receive the inaugural flight.

The flight would operate thrice during the week, notably, Mondays, Wednesdays and Fridays, connecting passengers from Lagos and Abuja to Makurdi.