The total value of Nigeria’s merchandise trade saw a sharp growth to reach N8.37 trillion in the third quarter of 2020, representing a 34.15 per cent rise on a quarter on quarter comparison to the N6.2 trillion recorded in the second quarter of 2020. It, however, showed 8.85 per cent dip year on year from the figure recorded during the corresponding period of 2019. 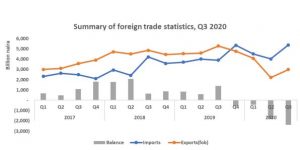 As a result, Nigeria’s total trade stood at N23.2 trillion year to date, according to the recent foreign trade data report released by the National Bureau of Statistics (NBS) on Monday and accessed by Business A.M.

This growth can be attributed to the easing of the lockdown restrictions and gradual resumption of economic activities which involved a faster increase in importations of merchandise and slower export recoveries across the borders of Nigeria. 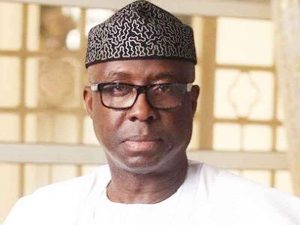 An analytical breakdown of the trade statistics shows that the import component was valued at N5.3 trillion representing an increase of 33.77 per cent in Q3, 2020 against (N4.02 trillion) the level recorded in Q2, 2020, and 38.02 per cent compared to Q3, 2019. The value of imports in Q3 2020 represented the highest level for any quarter since 2017. Thus, the increase recorded in the value of imports in Q3, 2020 can be attributed to the increases in the value of mineral fuels (N484.4 billion), machinery & transport equipment (N314.9 billion) and chemicals and related products (N261.0 billion) against their respective values in Q2, 2020. The imports represent 64 per cent of total trade for the period.

A further look into the report revealed that mineral products accounted for the largest proportion of exports, amounting to N2.8 trillion or 93.1 per cent, due to the crude oil component, and it was followed by vehicles, aircraft and parts (N103.4 billion) and others. Thus, exports represent 36 per cent of total trade during the period.

Away from Q2 2020, the value of exports in the period under review represents the lowest level of any quarter since 2017. However, due to lower exports and higher imports compared to 2019, the trade balance recorded a deficit of N2.39 trillion during the third quarter. This also represents the widest merchandise trade deficit since 2017. When compared to the deficit of N1.8 trillion recorded in Q2, the Q3 deficit rose by 32.45 per cent.

Equities market rebounds by 0.34% on modest gains in Dangote Cement, others