Governor Udom Emmanuel of Akwa Ibom State has asked the Niger Delta Development Commission (NDDC), under the management of Effiong Akwa, its interim administrator, to do well to complete the state’s power transmission line project from Ikot Abasi through Ikparakwa by linking it with the Alaoji, Aba power station with 1,074 MW combined cycle power plant. 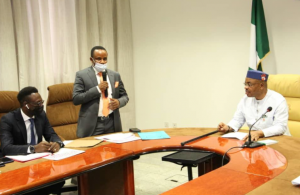 Governor Emmanuel told Akwa who visited him at Government House, Uyo, on his continuing engagement with the oil region’s stakeholders, that the Ikot Abasi power transmission line, if completed, could ease a lot of power problems in the region.

“It will help us to evacuate a whole lot of power from the Ibom Power Station to the national grid, and that will help the entire region,” he said.

He lauded the NNDC interim administrator for engaging major stakeholders to enlist their collaboration in addressing the challenges of developing the Niger Delta region.

Governor Emmanuel urged the NDDC to ensure to undertake inclusive approach to development, noting that the commission could achieve more by working in partnership with all the stakeholders.

“There is nothing as good as sitting down to discuss issues. We are not enemies, and we should be partners in progress,” the Akwa Ibom governor said.

He thanked President Muhammadu Buhari for appointing Akwa as the NDDC interim administrator, with the recommendation of the minister of Niger Delta affairs, Godswill Akpabio. But he quickly said further: “We also want to inform Mr. President that we have capable hands that can serve as the Group Managing Director of the NNPC, since we produce 36.1 per cent of the oil and gas reserves in Nigeria. We have the human resources to do a lot more things for the country.”

Emmanuel promised to support the NDDC’s interim administrator, but advised him to put things in place to ensure corporate governance in the commission. “We expect that with your private sector experience, you will make a difference. Make use of the opportunity you have now and leave a legacy in the region, no matter how short the time of your administration will be,” he said.

Ibitoye Abosede, director of corporate affairs, NDDC, quoted Akwa, the NDDC chief executive officer, as saying that his visit to Akwa Ibom was part of the commission’s continuing engagement with stakeholders of the Niger Delta region.

“When I was appointed just about sixty days ago, the President charged me with, among other things, to facilitate a stronger collaboration with, and build a more vigorous partnership among relevant stakeholders in the region. To facilitate the rapid, even and sustainable development of the Niger Delta, one of the key prescriptions of the United Nations’ Sustainable Development Goals (SDGs) is partnership,” Akwa said.

He applauded Governor Emmanuel for “demonstrating a strong belief in the Niger Delta project,” which, according to him, the governor brought the enterprise spirit, expertise and culture to bear in governance.

He remarked that his NDDC team’s visit is both to acknowledge Udom’s strategic importance to Niger Delta development, and to seek ways to forge a stronger alliance with the government and people of Akwa Ibom State. “In all these, we remain committed to providing projects and programmes of enduring quality. After so many years of underdevelopment, the people of this great region deserve no less,” the commission’s boss said.

He informed Governor Emmanuel of the commissioning of the new NDDC Headquarters complex, located at Marine Base, Port Harcourt on February 25.